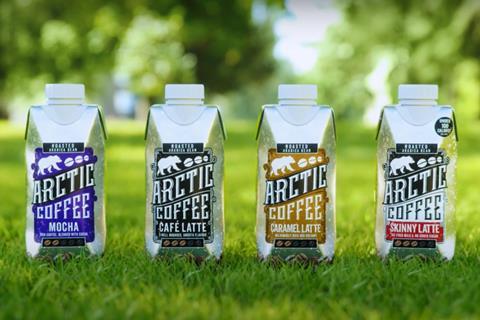 Iced coffee brand Arctic is set to make its on-screen advertising debut this month, with a slot on Channel 4.

The Crediton Dairy-owned marque’s £150k ‘Extreme…ly Refreshing’ campaign, which has been part-funded by the broadcaster, will run for three weeks from 17 August.

It has been aimed at Arctic’s target audience of 16 to 24-year-olds as well as ABC1 (upper-middle class) adults, who are also big drinkers of iced coffee, according to the brand.

In the 20-second ad, extreme sports – including sky diving – are compared with the “refreshment” of drinking an iced coffee. Consumers are also pointed towards the product’s positioning “chilling in most supermarkets”. Alongside TV, the campaign will roll out across social media channels such as YouTube and Instagram.

“In everything we do from the brand’s standout packaging, the influencers we align with, through to our advertising, we want to ensure that Arctic is a coffee that’s just as cool on the inside as it is on the outside,” said Arctic Coffee brand manager Jo Taylor.

“As such, our first-ever TV ad focuses on communicating the extreme refreshment of an Arctic Coffee in way that’s fun, uplifting and full of energy and in doing so captures the true spirit of the brand.”

Crediton said the idea of running a TV advertising campaign for its Arctic brand had been “some way down the track” as its finances had been focused on investing in its processing capabilities and capacity.

However, thanks to receiving half the funding for the project from Channel 4’s Greenhouse Fund – an initiative set up during the Covid-19 lockdown to enable smaller brands to access TV advertising – Arctic was able to get on to TV earlier than it had anticipated.