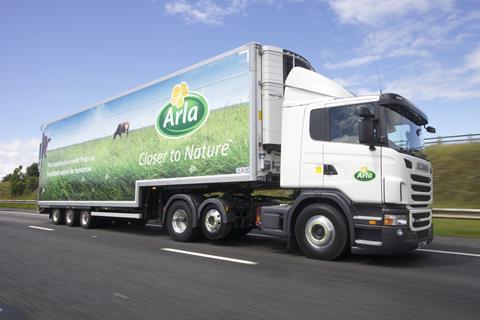 The food sector’s resilience during the coronavirus crisis does not mean the UK won’t face food shortages if it fails to agree a trade deal with the EU by the end of the year, Arla’s UK boss has warned.

A deal that minimised tariffs and non-tariff barriers would be the “only way to meet demand” on many key staples currently imported from the bloc, warned Arla UK MD Ash Amirahmadi. The alternative could lead to reduced availability and high prices.

With just over five months to go until the end of the Brexit transition period, there was “a gap between consumer expectations and the likely reality after 31 December 2020”, he added, while stressing “the UK cannot afford to stop worrying about doing a free trade deal”.

Though supply chains had largely managed to keep food on shelves during the pandemic, their success was “precisely because of the short, flexible, and well-established import chains we have with our close European neighbours who share our high standards”, Amirahmadi said.

“Any assumption the food industry response to the Covid-19 crisis shows we can cope easily with a hard exit from the EU misunderstands the degree of integration in food supply chains between the UK and Europe and the benefits this brings to consumers,” he added.

“This responsiveness would be lost without a free trade deal, and adding friction through non-tariff barriers will only increase costs and slow the movement of goods.”

Research by Arla during lockdown of 3,000 consumers found that while 69%  thought the price of food would rise and availability would reduce next year, they expected British products to fill any gaps on the shelves.

These findings were “troubling”, and betrayed a misunderstanding of the hundreds of millions of pounds of investment required to increase the UK’s self-sufficiency, said Amirahmadi, citing the fact the UK still imported 35% of yoghurt, 40% of butter and 67% of all cheese consumed here.

“Consumers have shown very clearly that they expect the food brands they trust to be on the shelves at an affordable price no matter what external circumstances we face,” he added.

“These expectations do not match up with what we could experience in 2021,” he warned.

“In most cases, UK alternatives will not be available on 1 January 2021 or on 1 July that year, or any time soon after.”

Arla’s warnings come as the government this week published its blueprint for how cross-border trade with the EU will operate after the Brexit transition period, including the possibility of a number of new border checks, safety and security declaration.

Meanwhile, the dairy co-op has announced a new partnership with Sainsbury’s and meat processor ABP for a voluntary scheme that will guarantee its farmers a price and home for male dairy calves as beef for the retailer’s premium Taste the Difference range.

The partnership would enable Sainsbury’s to provide more consistency in taste across the range, as well as improved traceability and consistent animal welfare standards for the animals, who carry Aberdeen Angus genetics.

“By working closely with Arla and ABP, we want to create a supply chain that is fully integrated, can deliver that consistency and is going to safeguard a home for calves produced by Arla dairy farmers and the Sainsbury’s Dairy Development Group,” said Sainsbury’s beef agriculture manager Jocelyn Orr.