Can Müller put milkmen on the road to a second coming? 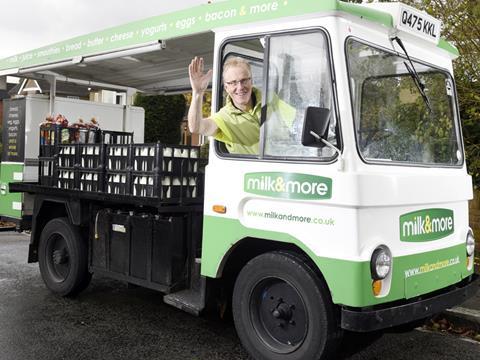 The figures aren’t looking rosy for Britain’s milkmen and women. Just 3% of milk sold in the UK last year was delivered to the doorstep, down from 45% in 1995. Little wonder, then, that clouds have been gathering for some time over the UK’s biggest milk delivery service, Milk&More.

When the business transferred to Müller in December as part of the German dairy giant’s acquisition of Dairy Crest, speculation quickly mounted over the future of doorstep sales. After all, Dairy Crest had already been planning to close the Hanworth plant responsible for supplying the glass bottles delivered by Milk&More. And, experts argued, what room was there really for a much-loved but ultimately outdated institution in the portfolio of an efficient, modern dairy company?

But now doorstep delivery has won an unexpected reprieve. Müller is not only reversing plans to close Hanworth, it is also ramping up investment in the service, with a new standalone Milk&More business unit announced last week. So what’s happened?

In essence, Müller has realised it owns a well-established direct-to-consumer network at a time when online grocery is booming, the threat of Amazon Fresh looms, and everyone is scrambling to figure out last-mile delivery to the consumer.

Doorstep milk delivery might be a market in decline but home delivery most certainly isn’t, says the head of the new Milk&More unit, Patrick Müller (no relation). “Home delivery is growing very fast and we are a trusted institution of home delivery,” he says. “We have a fantastic platform from which to work here.” Having said this, the proposition needs work to ensure it’s “relevant” for modern consumers. “I like to compare it to the Mini Cooper,” says Müller. “A much-loved British institution in need of investment to bring it up to date.” (And both owned by Germans!)

To this end, Müller plans to relaunch Milk&More in early 2017 with a “rejuvenated” offering. The new Milk&More boss is keeping his cards close to his chest but says milk - still in glass bottles - will remain absolutely central to the service.

In fact, the glass offering is to be expanded: with Hanworth now set to remain open, Müller wants to turn it into a “centre of excellence” for glass bottling, and he’s keen to start selling flavoured milk in glass bottles to Milk&More customers soon.

As for how the “More” part of Milk&More might be developed, Müller says the core planks are likely to be “British provenance from the farm” as well as breakfast. “Given the time of day of our deliveries, we have an opportunity to really own the breakfast proposition,” he says.

Extending the geographical reach could also be an option (Milk&More serves 600,000 homes through 58 depots and could potentially cover England with the exception of the North West and the North), but Müller’s priority for now is increasing customer numbers across the existing footprint.

Given growing supplier interest in direct-to-consumer selling, Müller also sees scope for leveraging the Milk&More delivery infrastructure through third-party partnerships. The reaction from the market to Müller’s announcement on Milk&More last week has been phenomenal, he says, and conversations about potential tie-ups are already happening.

But Müller insists the Milk&More relaunch is not a reaction to Amazon Fresh; in fact, he thinks Britain’s milkmen and women can deliver something Amazon can’t - trust and goodwill. “Amazon’s USP is technology, number of SKUs and price,” he says. “But we have something more. We have a great British tradition.”