More than a million litres of milk poured away during April 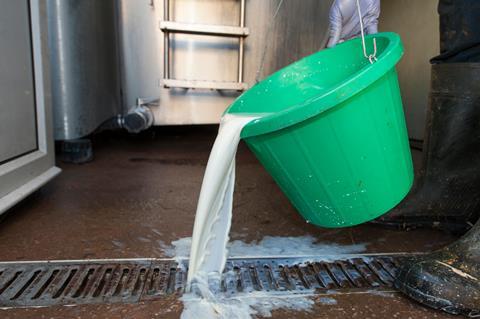 More than half of Great Britain’s dairy farmers had seen their milk price cut in April, according to the research by AHDB and Dairy UK

More than a million litres of milk went to waste during April as a result of the coronavirus crisis, new industry research has found.

Following the collapse in demand from the foodservice sector, three-quarters of Great Britain’s dairy farmers had felt some form of impact, the research - by Dairy UK and AHDB - revealed.

Some 12% had seen a high impact, with a further 14% experiencing a medium impact. And more than half of farmers had been handed a milk price cut, with 24% asked to cut milk production.

The research estimated the milk price cuts had taken more than £7m out of farmers’ pockets in April alone, and was expected to increase to another £13m in May. “For those farmers highly affected, the impact on overall net returns will be severe,” it warned.

Reducing milk production by farmers could lead to cost savings, but with a number of fixed costs still to be borne the overall loss for every litre cut was estimated at more than 18ppl.

A theoretical 3% reduction in output across the industry (a solution suggested by many industry commentators) would reduce net income for dairy farmers by a further £2.5m in April, Dairy UK and AHDB said.

And while payment deferrals - as some processors had been forced to impose - would not have much impact on profitability (assuming the milk was eventually paid for), the study warned it would “significantly impact cashflow for some farmers”.

This would have a potential knock-on effect on farm suppliers who may find their own payments being delayed, the research warned.

However, it stressed there was no evidence of a systemic industry-wide problem of milk disposals. It was instead more likely only a small fraction of processors and farmers had been affected.

The study, commissioned following crisis talks between Defra officials, farming bodies and processors earlier this month, will now be presented to Defra for further consideration, amid calls by farming bodies for direct financial assistance for affected farmers.