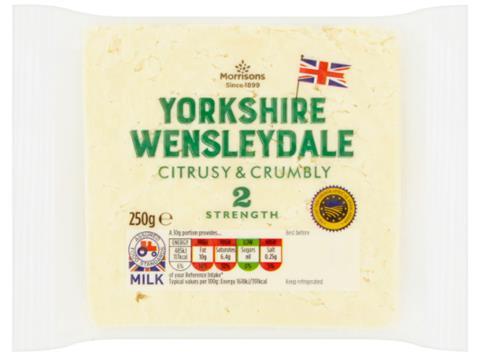 Morrisons has been named Cheese Retailer of the Year at the Nantwich International Cheese Awards this week.

The retailer scooped the accolade ahead of second-place Waitrose, ending its four-year winning streak. Morrisons won 29 gold awards from its 96 entries, Waitrose took home 25 and Booths came third with 17 golds.

Morrisons was also awarded British Regional Cheese Retailer of the Year, with its farmhouse Cheddar, Wensleydale, Double Gloucester, Lancashire, Red Leicester and Stilton all coming top in their categories.

“We seek out the very best traditional recipes for our regional cheeses,” said cheese quality expert at Morrisons Russell Haggata. “Our Rutland red Leicester is cloth-bound and sealed with butter to give it an authentic taste. Our double Gloucester is traditionally made with open vats and hand salted giving a buttery-creamy profile.”

The Nantwich Awards saw 300 judges sample in excess of 5,000 cheeses in more than 500 categories.

“It is testament to our fantastic team of cheesemakers who have over 100 years of experience between them, our dedicated group of local farmers who supply us with milk and the commitment of all at Belton Farm to making great tasting British cheese,” said Belton Farm MD Justin Beckett.

“Being awarded the Supreme Champion for our traditionally-made coloured Cheshire cheese reflects our passion for producing great tasting cheese and that here in Great Britain we have some of the very best cheese made anywhere in the world.”