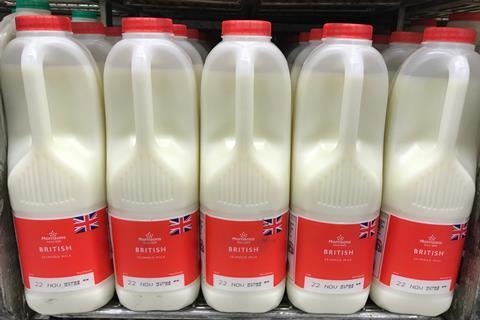 Morrisons is the second retailer to join the scheme

Morrisons has become the second major supermarket to sign up to Arla’s dairy farm assurance standard Arla 360, and the first to sign up its entire milk supply base.

All farmers supplying milk to Morrisons will move to the new standard by October and would be “compensated” for meeting the additional requirements, said Arla Foods UK agriculture director Graham Wilkinson.

He added the dairy co-op, which introduced the standard last October, was in discussions with other retailers over its adoption. Aldi was the first to sign up to Arla 360 last autumn. However, the scheme is currently voluntary for those supplying milk to the discounter.

“It’s hugely significant Morrisons is supporting the Arla UK 360 programme across all of its Arla supplied milk,” Wilkinson said. “This level of support creates real scale to the programme.”

The scheme worked alongside existing initiatives such as the dairy giant’s Arlagården assurance programme, which all Arla farmer owners have to adhere to and guarantees criteria such as food safety and milk composition, alongside animal welfare and environmental standards.

“Being supplied by farmers who care about their staff, environment and the welfare of their animals is important to our customers and therefore it is important to us,” said Morrisons agriculture manager Sophie Throup.

“We are looking forward to working with Arla on introducing their 360 standard to our pool of farmers.”

The greater the support Arla 360 received from the retail sector, the greater the number of Arla farmers could participate, said Morrisons milk supplier and Arla board member Arthur Fearnall.

Creating one standard for its customers provided “increased financial return for farmers and flexibility for research and development to continuously improve our industry”, he added. “We are delighted Morrisons will be investing in Arla 360 across its entire Arla milk supply, meaning around 200 farmers will benefit from their additional support.”