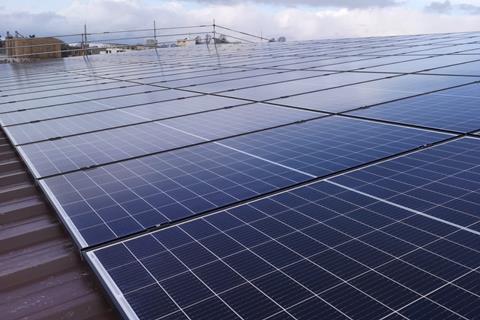 Cheese brand Wyke Farms is to further expand its renewable energy division with the addition of solar panels.

Some 288 panels on the roof of the packing hall dispatch building at its Wincanton site will create 96kw of solar energy per hour and will be used to power Wyke’s new chilled export dispatch store and packing line. The two new buildings, due to be completed by September, will also be fitted with heat-reclaiming air source heat pumps to produce hot water and heating for its offices.

The initiative forms part of Wyke’s 100% Green sustainability plan, which has seen the cheesemaker dramatically reduce its carbon footprint and become the first national cheddar brand to be 100% self-sufficient using its own energy generated from solar and biogas.

“Back in 2010 I was quoted as saying ‘we are a business that believe in the principles of sustainability’ and since then we have been named as Europe’s sustainable business,” said Wyke Farms MD Rich Clothier.

“But it doesn’t stop there. Continual development of our green portfolio is a given, our aim now is industry change,” he added.

“This is now our fourth business solar array set and takes us forward with our commitment to position solar on all of our south facing roofs where we use daytime power. Reducing carbon for us, is really lower cost.”