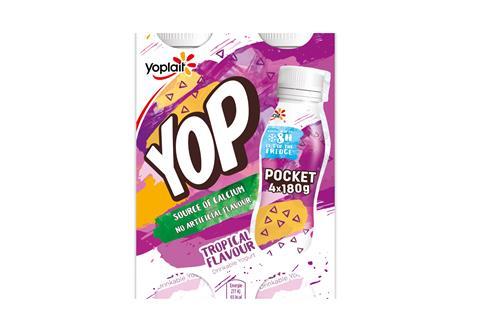 Drinking yoghurt brand Yop has undergone an overhaul in a bid to reconnect with its core teenage audience.

The General Mills-owned marque has unveiled a tropical flavour and a new 180g four-pack variant as well as an updated look.

The brand said its new flavour came about after consumer testing, which revealed tropical “was super popular with teens”.

It added that the new pack size (rsp: £1.99/4x180g) would target the on-the-go market and hoped it would appeal to “larger families” as well as tap into new usage occasions. Yop also trumpeted its new “modern and dynamic” packaging, which highlights that the bottle is 100% recyclable.

“We’re on a mission to create the perfect nutritious and tasty yoghurt drink for teens,” said brand manager Rosanne McDonnell.

“Yoghurt drinks are a major area of opportunity for the dairy industry and we felt it was the right time to re-evaluate our portfolio and elevate it to meet the changing needs of the consumer.”