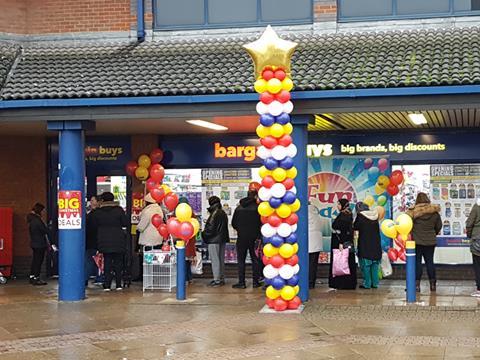 First introduced by Poundworld in 2013, there were 50 Bargain Buys when the business was sold in 2015

A row over who owns the ‘Bargain Buys’ name took a new turn this week as Poundstretcher’s trademark application was accepted by the Intellectual Property Office.

The variety discounter has opened more than 40 stores under the banner since September despite it being the name of a chain owned by Poundworld, which collapsed last year.

An application from Poundworld to trademark the name, filed in October last year after the business entered administration, remains under examination by the IPO. Meanwhile Poundstretcher’s application, filed a month later, has progressed further to be accepted and published in the IPO’s Trade Marks Journal for opposition purposes.

It looks like a setback for Leeds property businessman Manni Hussain, who bought the Bargain Buys and Poundworld names from the administrators in November and planned to bring both brands back to the high street this year.

Hussain, chairman of Leeds property company 88m Group, had planned to open 250 stores by the end of 2019, with 50 set to be Bargain Buys and the rest Poundworlds. He has not responded to The Grocer’s latest enquiries.

Hussain met with Poundstretcher bosses in December but it is understood a resolution was not reached.

Poundworld’s application is for ‘BARGAIN BUYS’ while Poundstretcher’s is for the longer ‘bargain buys big brands, big discounts’.

First introduced by Poundworld in 2013, there were about 50 Bargain Buys when founder Chris Edwards sold the business to TPG Capital in 2015.

The Grocer understands the reason Poundworld had not trademarked the name before October last year was that ‘Bargain Buys’ alone was considered too generic.

Poundstretcher’s commercial director Somnath Saha said he was “pretty confident” the application would progess to become registered and legally protected.

Poundstretcher’s application includes logo designs showing the words ‘Bargain’ and ‘Buys’ coloured differently to each other, a style that was also used by Poundworld.

The Grocer revealed in December how Poundstretcher planned to convert its entire estate to the Bargain Buys name over time by adopting the banner on every new or refitted store.

The multi-price discounter also has ambitious plans to nearly double its 439-store estate in three years. A corporate presentation seen by The Grocer sets the target of adding 100 stores a year to reach 800 by April 2022.

A trading statement from the retailer this morning (16 January) said like for like sales had risen 1.2% in the run-up to Christmas.

In the period from 30 September to 29 December total sales grew 11% to £152m which was a “reasonably good” performance “during a tough time for the retail industry on the high street”.

Sales growth was driven by store openings, with footfall up 2.3% on the previous year.