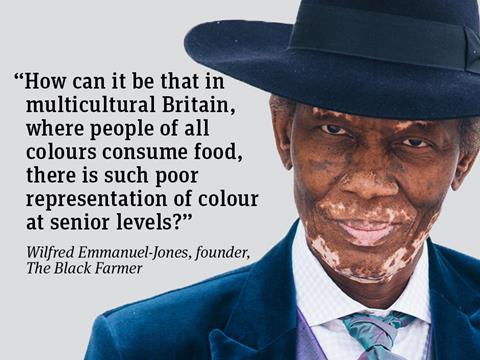 When launching my brand, I wanted to stand out from the crowd trying to sell to food retailers. I took myself off to Favourbrook in London’s Piccadilly to kit myself out in something memorable. My pièce de résistance was a wide-brim fedora. Making my way around the retailers’ headquarters, it quickly dawned on me that I could have saved myself a small fortune. I stood out by virtue of the colour of my skin.

I recently emailed the CEOs and press offices of some of the top food retailers and manufacturers. I asked for details of their diversity policies and, specifically, the number of ethnic minorities at a senior level. The responses have been both encouraging and alarming.

I’ve had very quick replies from Marks & Spencer, the John Lewis Partnership, Sainsbury’s and Tesco. All were open and positive about their diversity policies and targets. Booker sent information past the deadline but is forgiven because its figures are encouraging.

Read more: How a focus on human potential boosted sales at Thornton’s Budgens

One of the questions I asked is how they were planning to celebrate Black History Month this October. Asda cited some of the events carried out by its parent company Walmart in the US last February. I wonder if this means it has no plans for this country? I wait with bated breath to see what celebration it puts on.

The real shocker for me was that only five of 15 food manufacturers deigned to get back to me - Unilever, Kerry Foods, Associated British Foods, Tulip and Birds Eye. I take the total lack of response from the others as an indication that diversity just isn’t important enough to them to warrant a reply.

How can it be that in multicultural Britain, where people of all colours consume food, there is such poor representation of colour at senior levels?

The mainstream grocery trade is one of the last remaining white, macho, male industries, powered by testosterone. It makes it a battleground for those of different gender, socio-economic background, age and mental health as they, too, fight for equality.

Read more: Why the food & drink industry is facing a ‘time bomb’ on labour

This week, I took on a black account manager and, as part of his induction, I briefed him on how to cope with being a black guy operating at his level. Don’t be offended when you are mistaken for a minicab driver. It has happened to me twice. Take a deep breath when you are referred to as “coloured” rather than black. I have lost count how many times I have heard that. And count to 10 when you are complimented for “not being like a normal black person”.

It’s clear diversity is low down on the priority list. But some of the supermarkets are trying; it’s the suppliers who appear to be the main culprits.

The problem could be easily fixed. I propose that, as part of supermarket contract negotiations, there is a diversity clause. Suppliers would be tasked with reaching an agreed gender and colour target, with a penalty linked to under-performance. We would see a dramatic change overnight.

Supermarkets are on the front line when it comes to taking responsibility for a fairer society. As a supplier, I think it is about time we did our share.

Wilfred Emmanuel-Jones is founder of The Black Farmer