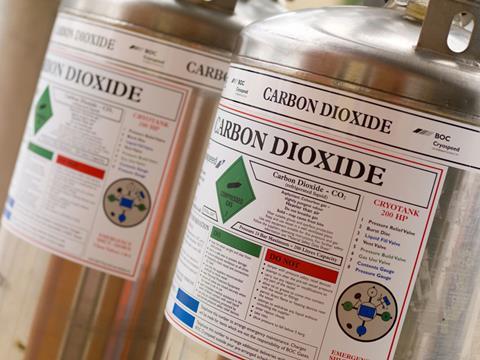 CO2 gas is a key component for poultry supply chains

The staff crisis plaguing the poultry sector is being compounded by mounting concerns over new shortages of CO2 gas, The Grocer can reveal.

In an echo of the CO2 crisis of the summer of 2018 – which led to delays in bird slaughtering and shortages of fresh chicken and other food and drink products – a series of issues linked to CO2 gas production across Europe meant supplies were on a knife-edge, said British Poultry Council CEO Richard Griffiths.

CO2 gas is a key input for poultry supply chains. It is used both in the slaughter process to stun birds before they are killed, and to create the modified packaging atmospheres that extend shelf life.

And while there has been some investment in CO2 gas production and capture technology for use in the food industry in recent years, the gas used in the poultry sector is largely derived from the ammonia sector as a by-product.

The 2018 crisis emerged when already-stretched supplies of the gas were exacerbated by a series of technical issues and breakdowns at manufacturing plants, leading to warnings in June of that year that more than half of the poultry supply chain could grind to a halt.

Though Griffiths stressed this year’s shortages had not yet reached that critical point, the situation was now “heading in that direction”, he warned.

The combination of one Dutch ammonia plant operating at 75% capacity, alongside a shutdown at an ammonia plant in Norway for five days of maintenance this week, are said by industry insiders to be two contributors to the shortages.

Poultry suppliers have told The Grocer a halt in production last week at a plant operated by chemical firm Ensus at Wilton on Teesside was another factor. Meanwhile, it is understood customers of CF Fertilisers at nearby Billingham were issued with ‘force majeure’ notices this week due a halt in production, with no prospect of supply resuming until 19 July at the earliest.

Ensus, however, denied any issues with production. Meanwhile, CF confirmed its Billingham plant was “undergoing scheduled maintenance, and, as a result, CO2 is not being produced at the facility and not available for customers” .

The shortages were leading some processors to prioritise chicken production over turkey, said one industry source.

Though a second source added gas suppliers had flagged there would be planned maintenance shutdowns many months in advance, the cumulation of issues across multiple sites meant the situation “could get tricky” for some processors “if full supply does not resume ASAP”, they warned.

“This repeat of 2018’s gas shortages – on top of Brexit labour shortages – has put the industry in a very challenging position,” said the BPC’s Griffiths.

“And it could very quickly become a dire situation. We can plan for labour shortages by reducing flocks, but situations like this mean throughput is disrupted and animal welfare issues can emerge if they are not carefully managed,” he added, while calling on food businesses to be prioritised for CO2 deliveries.

“We’ve worked very hard over the past year to keep food supplies consistent and issues like this just add disruption to these efforts.”

Elsewhere, a spokesman for processor Avara Foods admitted the shortage was a “major issue”, but it was “working closely with customers and our supply chain to try and navigate this period as smoothly as possible and maintain animal welfare”.

A Defra spokeswoman said the government was “aware of the short-term industry CO2 shortages and are in regular contact with the food and farming organisations who are monitoring the situation carefully”.

Defra would “continue to work to ensure any disruption to food supply chains is minimised, and animal welfare is not compromised – and will consider if further action needs to be taken”, she added.