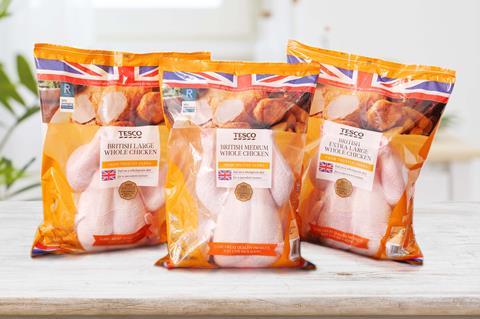 The range will start rolling out in new packaging next year

Tesco will remove 16 million pieces of plastic from its own label chicken range next year.

The retailer will achieve its goal by removing the plastic tray and film from its medium, large and extra-large chickens and replacing it with a single bag, in a move that would also cut the overall weight of packaging it uses in the range by 30%.

Part of Tesco’s 4R (remove, reduce, reuse, recycle) packaging programme – which aims to remove non-recyclable and excess packaging from its business – the move follows a successful trial at its store in Bar Hill in Cambridge, where it tests ideas to help tackle the impact of plastics.

The switch in packaging was also more hygienic for customers to handle and made it easier to transfer the bird into a roasting tray without having to handle the chicken. Tesco said.

It follows a switch by Tesco and its cheese supplier Ornua to remove up to 260 tonnes of plastic per year from its own label cheese lineup by adopting the new, oblong shape introduced to Ornua’s Pilgrims Choice range in September.

Tesco said that move, which is currently being rolled out in all stores, could save as much as 11 tonnes of plastic in just the two weeks before Christmas.

The retailer was “focused on removing any plastic which is unnecessary, reducing anything that is excessive, introducing reusable options, and making sure everything that’s left is recyclable” said Tesco quality director Sarah Bradbury.

“Our new chicken pack is a great example of how we are redesigning our packaging to use less plastic, and at the same time we have made it easier and safer for customers to use.”