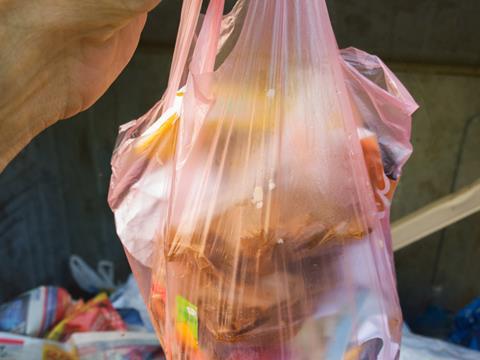 Supermarkets in Great Britain are dishing out nearly 90% fewer single-use carrier bags than they were two years ago, according to research from market analysts IRI.

Scotland introduced a 5p levy on the bags in October 2014, while England followed suit a year later. Only Wales had been charging for bags before then, having introduced a levy in 2011.

With charging in place across the board, sales of 5p bags across Great Britain amounted to 1.1 billion units in the year to 12 October 2016. This suggests an 87% fall in the number of single-use carrier bags either given away or sold by supermarkets compared with 2014 numbers.

“While it still appears that large volumes of plastic bags are being used by shoppers, the government’s target of an 80% reduction in plastic bag production was easily met,” said IRI’s head of strategic insight for retail, Martin Wood.

However, the fall in carrier bag use has also been accompanied by a big growth in sales of bin liners. Following the introduction of the tax in England, value sales are up from £156m to £169m, a rise of 8.3%, while volumes are up 11.3% to 90 million packs [52 w/e 1 October 2016] - at a time when most household categories are in decline.

Wood added: “The correlating growth in the bin liner category suggests that some people who previously used free plastic bags for collecting and disposing of their rubbish are now having to buy bin liners instead.”