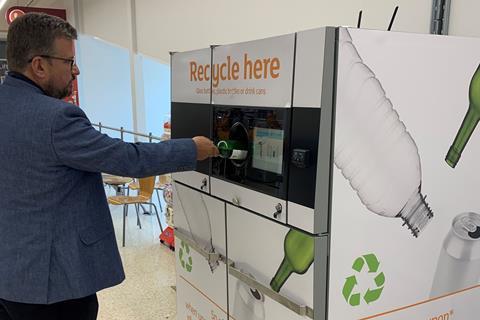 The retailer has joined forces with Tomra Collection Solutions UK & Ireland for the trial in Newbury, Berkshire

Sainsbury’s has launched England’s first DRS trial to include glass bottles, as arguments continue to rage over whether Defra’s proposed new system should include all types of materials.

The trial is taking place at a Sainsbury’s supermarket in Newbury, Berkshire.

Last month Defra released the results of its consultation into a DRS for England, Wales and Northern Ireland which revealed strong public support for an ‘all in’ scheme, with former environment secretary Michael Gove pledging his support for the solution before taking up his new post as Brexit tsar.

However, plans to include glass have attracted huge opposition from retail bodies, with the BRC warning it would add £600m to the cost of a UK-wide system.

The Scottish government has already vowed to push ahead with an all-in system as early as 2020.

Earlier this month Boots launched a trial in Scotland of a DRS machine able to accept glass.

Under its new trial, Sainsbury’s is offering a 5p coupon for every qualifying drinks container which is returned to the machine.

“We are excited to be working with Sainsbury’s on this landmark trial,” said Tomra Collection UK & Ireland MD Truls Haug.

“Showing how three materials can be easily collected in stores with Tomra reverse vending technology is an important learning for retailers and consumers as we move towards an all-inclusive deposit return scheme in the UK, starting with Scotland.

“We look forward to hearing feedback from shoppers and Sainsbury’s staff as the trial progresses.”