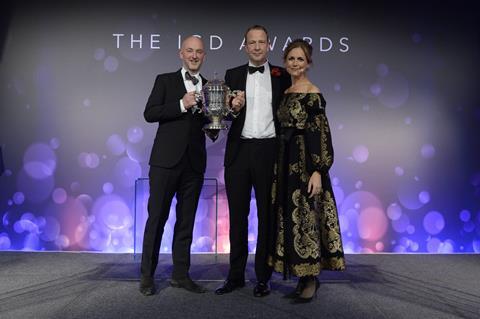 Dave Lewis, the man who turned around the Tesco super tanker, has won The Grocer Cup, adding one of the industry’s most coveted awards to his CV before he bows out at the supermarket.

Lewis picked up the trophy at the prestigious IGD Awards ceremony at London’s Tobacco Dock, on Thursday night.

The Cup, first established in 1923, celebrates a senior industry figure who has shown outstanding leadership in the past year and is voted for by readers of The Grocer.

Last month Lewis announced plans to step down in June – five years after being parachuted in to run Tesco when it was reeling from plummeting sales and an accounting scandal. In that period Lewis has repaired Tesco’s damaged brand reputation with shoppers and the City, with Lewis declaring that “every element of the turnaround had been delivered” at the half-year results in October.

Presenting the award Adam Leyland, editor of The Grocer said: “Whilst Lewis did not save Tesco all on his own, his impressive leadership, brilliant communication skills, integrity, and clear vision for the business – based on doing the right things in the right way – has been the biggest factor in its successful turnaround.

“As the nominations show, Lewis has earned the admiration and respect not only of colleagues but of suppliers too – a situation that would have been unimaginable when he started in the role.

“He has also not taken his foot off the pedal, even after deciding it was time for as new challenge, with Tesco continuing to set the agenda among the big supermarkets with an ambitious programme of new developments.”

The trophy was picked up on the night by UK CEO Jason Tarry as Lewis was away on business. “The Tesco team is delighted that Dave has deservedly won this award,” said Tarry. “From day one he has led Tesco brilliantly, personally setting the perfect tone, pace and ambition that we needed, leading by example and inspiring us all to try to follow him – doing the right things in the right way and resetting the culture as well as the performance.”