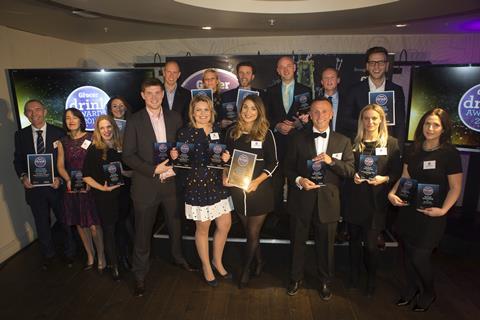 The winners of the Grocer’s first-ever alcoholic drink awards

The first-ever alcoholic drink awards by The Grocer culminated in a lavish ceremony at the Banking Hall last night (7 November), where the winners where announced with big players such as Heineken and Treasury Wine Estates picking up trophies alongside more niche entrants, including Wychwood Brewery and Dunnet Bay Distillers.

TWE had a particularly good night, taking home three awards across the two fruit wine categories for its Blossom Hill Fruit Bloom portfolio comprising two golds (for Hints of Cherry and Hints of Elderflower), while its Summer Fruits variant was awarded silver.

In spirits, Dunnet Bay Distillers stole the show. It received gold for both its Holy Grass Vodka and Rock Rose Gin, while Wychwood Brewery picked up the top gong in the beer category for its Hobgoblin brew.

Heineken celebrated with a gold award for Amstel while taking the silver in cider for Strongbow Cloudy Apple as it was beaten to the post by rival Henry Westons Vintage Cider, which was awarded gold.

All the gold winners will be given the opportunity to be badged with the award logo, instantly improving shelf standout.

Launched in June in association with Cambridge Market Research, the awards were created specifically to reward and recognise quality, taste and value in own-label and branded drinks, joining our well-recognised and respected stable of awards including The Grocer Own Label Food & Drink Awards and The Grocer Gold Awards.

A four-page feature with full details of all the champions, plus expert and consumer comments, will be published in this week’s issue of The Grocer.