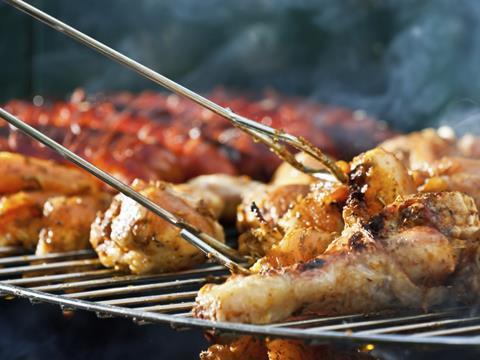 Focus On: BBQ by Natalie Brown

Barbecues are going health-conscious. Today it’s all about lean cuts of meat such as chicken, which has overtaken sausages to become the nation’s second most popular BBQ choice. And when we do go for red meat, we’re going for premium cuts of beef and lamb. This year we’re also likely to go meat-free, as jackfruit cements its status as a pulled pork alternative. So whatever you bring on the barbie, make sure it isn’t a second-rate sausage from the back of the freezer.

‘Healthier’ proteins: Chicken overtook sausages to become the second most popular BBQ choice last year, as consumers became more health-conscious. Is this likely to be repeated this year? Could other sub-categories such as fish benefit from this health drive? And what can sausages do to regain their position? Are new ‘flexitarian’ sausages likely to increase healthy perceptions?

Better quality red meat: Burgers are still the top of the BBQ charts, showing that our love of red meat is far from over. However, consumers are becoming more concerned about quality. We’re looking for premium cuts of beef and lamb rather than bargain buckets. How has the market responded to this? Which premium products are likely to do well this year?

Vegan: This January was the month the vegan revolution really gained momentum so how likely are vegan/vegetarian options to make a splash this year?

Quick and easy: Simplicity is another factor becoming more prominent at the barbecue. Shunning typically long preparation times, consumers are increasingly appreciating both easy and quick to prepare products to take some of the hassle away from the meal. How will this mindset influence choices this year?

World flavours: South East Asian cuisine such as Korean and Japanese is tipped to grow in popularity with Brits this year, as is South American. How will this influence BBQ choices?

Sides: Of course barbecue’s not only about meat. This feature will also explore which kinds of food Brits are choosing to serve up with their barbecued bangers and burgers and why. What’s in growth? What’s in decline? Which factors are driving this change?

Sauces: The barbecue season is of growing importance to sauce brands, large and small. How are players looking to cash in at this time of year, in terms of tactics such as featured space and price promotions, link deals, NPD, above the line advertising in store activity and so on?

Innovations: We identify eight new barbecue products or product ranges (including meat, sides, sauces, barbecue hardware, etc) that have ideally not appeared in The Grocer before, including launch date and RSP, and image

 What consumer trends have impacted the category over the past year?

 How have promotional strategies (both in terms of price and marketing) evolved?

 How have individual retailers’ strategies impacted the market?

 What impact has own-label had on branded players?

 What’s next for the category?