Cash machines can be a cash cow 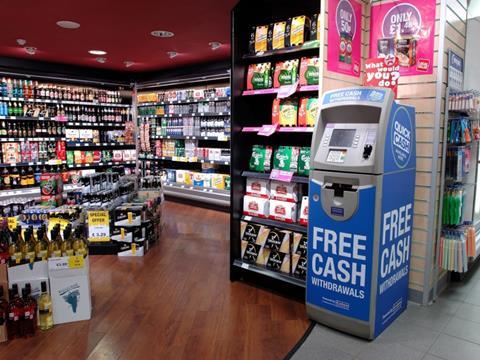 Many independent retailers regard in-store cash machines as too much of a hassle. Of the 250 retailers questioned for this month’s business barometer (see below), 41% said that cash machines weren’t worth the effort financially - a further 21% of retailers said they didn’t have a cash machine in-store because it would take up too much space.

But could these retailers be missing a trick? Based on new research undertaken by Populus on behalf of ATM services provider Cardtronics Europe, it appears that rather than being a drain on resources, cash machines could be cash cows.

The survey, which questioned more than 800 consumers on their shopping habits, found that 52% of respondents used ATMs in c-stores at least once a week, with more than a third of consumers aged 25 to 34 using ATMs at least every two to three days. In addition to driving footfall, the research also suggested that there’s an opportunity to generate extra spend from consumers withdrawing money from the ATM.

“In a packed high street where local shop managers are competing to attract customers, it is becoming more important than ever for shop mangers to deliver quick and efficient services for consumers, vitally, all in one place,” says Cardtronics’ MD Jonathan Simpson-Dent. “Having a cashpoint on site allows consumers to buy their groceries and their paper at the same time as taking out cash.”

The numbers present a compelling argument in favour of installing an ATM, but what’s the best way of going about this?

A spokeswoman for UK ATM operator LINK says that the first thing that retailers need to consider before taking the plunge is which cash machine provider to partner with.

“Different ATM operators offer different contracts, pricings, options, etc, so retailers should make sure that they are getting the best deal,” advises the spokeswoman.

It’s a view supported by Gordon Miller, MD at High Noon Stores. “Make sure you shop around with providers to find the best fit for your stores,” says Miller. “Also think carefully about what you are trying to achieve. This will influence your choice of machine, how it’s filled, whether it charges, etc. Finally, you also need to consider where you should site the machine - security, customer comfort and impact on customer flow are all important considerations.”

The location of the cash machine in a store can also make a significant difference to how successful - or not - it is, according to North East Convenience Stores financial director Sanjeev Vadhera.

While the Populus research suggests that indoor ATMs are marginally more popular than outdoor ATMs - 63% of people interviewed used the indoor ATM in a shop at least once a week - North East has found the opposite to be the case.

These are eyewatering numbers, but there are some downsides associated with installing an ATM, says Miller. “Self-fill ATMs require additional time and security measures to fill,” he explains. “They also require adequate cash availability to keep them in service. If the machine malfunctions, it’s a very irritating situation for the customer.”

You also have to make sure that you’re “not in conflict with other services and restrictions that you may inadvertently have in your store, such as free cashback or a Post Office restriction,” says Vadhera.

However, the independents that heed the advice of the experts could transform their cash machines into real cash cows - giving themselves a distinct competitive advantage over those who don’t.