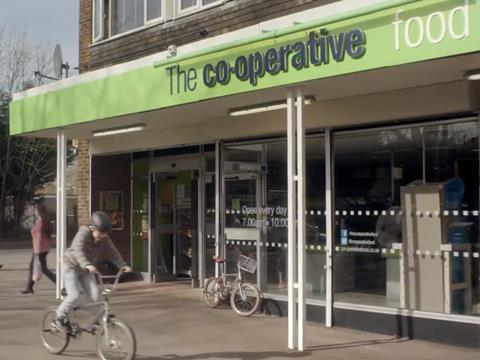 Revenue fell from £9.7bn to £9.4bn during the year, but the group benefitted from a £30m reduction in central corporate costs and one-off gains from the disposal of its pharmacy and farms businesses.

Group profits before member payments (the equivalent of pre-tax profit) was back in the black at £124m, though underlying operating profit slipped from £177m to £172m. The Co-op said the results reflected robust performances in food and funerals, offset by losses in general insurance

Chief executive Richard Pennycook hailed the “solid progress” the group made last year. “The hard work of Rebuilding The Co-operative Group for the next generation, and restoring it to its rightful place at the heart of communities up and down the UK, is now underway.

“A significant element of our 2014 profit relates to one-off disposal gains on the sale of our Farms and Pharmacy businesses and property disposals. Without these we would, at best, have broken even. Against that backdrop, and given the need to invest in all our businesses, the Board will not be recommending a dividend to members and believes that a resumption of dividend payments is unlikely until the rebuild phase is complete and we have returned to sustainable profitable growth.”

Meat producer Cranswick has issued a full year trading update, revealing that underlying volumes were 4% up in the fourth quarter. However, this only boosted underlying sales by 1% given that lower input costs had been passed on to customers. Total sales in the final quarter were 4% higher and 1% higher for the full financial year.

Cranswick expects profitability to be “in line with its expectations” when it reports its full-year results on 18 May, noting that: “With experienced management at all levels of the Group, a strong range of products, a well-invested asset base and a robust financial position, the board remains confident in the continued long-term success and development of the business.”

There’s also a short trading update from PZ Cussons this morning, with the consumer goods firm saying performance “has been in line with expectations” during the period from 28 January to 8 April. In its largest market, Nigeria, the naira exchange rate is currently stable following a further devaluation in the period, and trading has “resumed as normal following a short period of lost trading days during the presidential election process”.

The market has opened up this morning, with Sainsbury’s, GlaxoSmithKline, Reckitt Benckiser and Unilever all up by 1% or more in early trading so far. Cranswick is 1.7% up at 1,424p after its full year trading update.

It was a less dramatic day in the City yesterday as an early rally that saw the FTSE break through the 7,000pts barrier again tailed off as the day wore on to leave most stocks largely unmoved.

The FTSE 100 ended the day edging down 24pts to 6,937pts as investor sentiment soured on oil giant Shell after the announcement of its takeover of fellow FTSE 100 constituent BG Group.

In the grocery sector, the main moves were related to the release of the latest Kantar Worldpanel data. While most headlines were grabbed by Aldi moving above Waitrose in terms of market share, Sainsbury’s was boosted by Kantar showing a return to sales growth over the 12-weeks to 29 March.