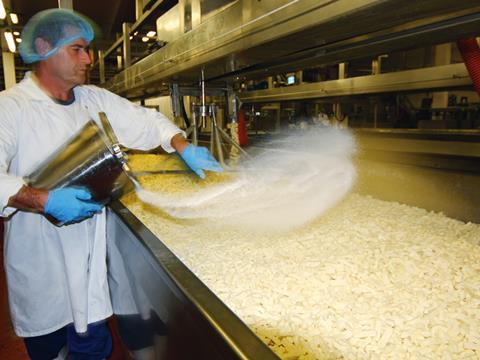 Food and drink manufacturing continues its rise as a major UK growth industry, with the production of dairy, meat and pastry products now worth £21bn to the economy alone.

The whole of UK manufacturing grew 3% to £364bn in 2014 – the equivalent of £9.2bn – according to the latest official PRODCOM Report from the Office for National Statistics (ONS) by Santander Corporate & Commercial.

The manufacture of luggage, handbags and saddlery became the fastest-growing sector in the UK, with production worth £205m in 2014 compared with £133m in the previous year – a year-on-year increase of 54% and a seven-year high for the sector.

Overall, the manufacture of motor vehicles remained the largest UK manufacturing sector in terms of production, worth £36bn produced.

The operations of dairies and cheese-making businesses, which produce a combined £8bn, processing and persevering of meat (£7bn) and manufacture of bread, pastry, goods and cakes (£6bn) were found to be three of the 10 largest manufacturing sectors in the UK. The three sectors registered year-on-year growth of 12%, 7% and 4% respectively.

Charles Garfit, head of manufacturing for Santander Corporate & Commercial, said: “Santander is increasingly working with and supporting manufacturers of high-end food and drink products, usually with a strongly British branding as these sorts of products are becoming increasingly well received domestically and also around the world.”

There is little else of note this morning during half-term week, with results to come on Thursday from Asda and Nestlé.

Other big risers included Ocado (OCDO), which jumped 5.8% to 259p and Poundland (PLND), which climbed 4.8% to 155.6p despite the latest terrible accounts of 99p Stores being filed at Companies House.

Greencore (GNC) and Conviviality (CVR) both made gains of more than 4%, and B&M (BME), Morrisons (MRW), Tate & Lyle (TATE) and Sainsbury’s (SBRY) all rose more than 3% to complete a generally good day for food and drink stocks.

At the opposite end PureCircle (PURE) continued its miserable run to close 6.9% down at 323p. The stock is down more than 20% so far this year.