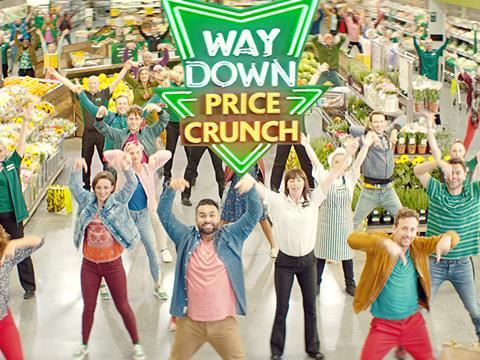 Morrisons ‘Way Down Price Crunch’ was popular with customers in Q3

The recovery at Morrisons (MRW) continued in the third quarter as like-for-like sales rose 2.5%.

The Yorkshire headquartered supermarket reported that, excluding fuel, 2.1% of the growth came from its retail operations and 0.4% from wholesale in the 13 weeks to 29 October.

Group like-for-like sales including fuel increased 3.4% in the period, with total sales for the quarter, excluding fuel, up 2.3%.

Morrisons said it worked hard during the quarter to limit the impact of lower sterling on imported food prices, and made “good progress” on becoming more competitive.

The supermarket added that its ‘price crunch’ was popular with customers, and the new ‘way down’ campaign was holding prices lower for longer.

CEO David Potts said: “We are pleased with a further step up in our competitiveness and another period of positive like for like sales growth.

“I am confident our plans to keep serving customers better will enable us to continue the strong momentum of the year so far, into the important fourth quarter.

“As we work towards becoming a broader, stronger business, a new Morrisons is taking shape, built by our colleagues on firm balance sheet foundations.”

Shares in Morrisons fell 1.1% to 221.5p as markets opened, likely driven by growth coming in a touch below analyst consensus.

Carlsberg has lifted its profits expectations for the year thanks to its massive cost-cutting strategy.

The Danish brewer said in a third quarter trading update that its ‘Funding the Journey’ programme was progressing well and total benefits would be about DKK 2bn (£236m).

Carlsberg announced the radical restructuring at the tail end of 2015 to combat problems in its Russian business and decline in the UK after Tesco delisted the brand. The move included axing 2,000 staff – 4% of its total global workforce – including hundreds in the UK, and was expectd to save between DKK 1.5bn and DKK 2bn by 2018.

Carlsberg raised its forecast organic operating profit growth from mid-single digits to 7-8% thanks to the fastest-than-expected delivery of the benefits from slashing costs.

The brewer also expected positive currency translation to benefit the business by about DKK 75m in the year rather than DKK +50m previously estimated.

It comes as net organic revenues decline 1% in the third quarter to DKK 16.7bn (£2bn) as higher beer prices offset a 4% slump in volumes.

The group said it saw “good growth” for its international premium brands: Tuborg +5%, Carlsberg +1%, Grimbergen +7% and 1664 Blanc +42%. And craft & speciality volumes soared 34% in Western Europe, along with a 14% rise for alcohol-free beer volumes.

“In the third quarter, our premiumisation efforts continued to deliver a solid price/mix development, while volumes, as expected, were impacted by the PET downsizing in Russia, tough comparables in Eastern Europe and poor weather in Western Europe.”

US food giant Kraft Heinz (KHC) has halted the decline in its top line as sales rose 0.7% to $6.3bn (£4.8bn) in the third quarter on growth in Europe, Canada and the rest of the world.

The 0.7% rise in net sales was made up of a 0.4% bump from favourable currency exchange and 0.3% of organic growth.

“We continued to build top- and bottom-line momentum from operations during the third quarter, and expect to see the same in the fourth quarter,” CEO Bernardo Hees said.

“There’s no question that the retail environment, particularly in the United States, will remain both dynamic and challenging. However, the investments we’ve been making in our brands, our innovation pipeline, our people and our capabilities make us well-positioned to continue delivering sustainable, profitable growth in both the near and long term.”

First-half profits jumped 26% at TATE & Lyle (TATE) as the ingredients and sucralose producer improved trading and benefited from currency gains.

Sales in the six months to 30 September rose 6% to £1.4bn as its speciality food ingredients division grew 5% and bulk ingredients arm by 6%. Tate also reported a 14% sales increase from new products.

Pre-tax profits increased from £128m for the first half last year to £161m. Speciality food ingredients increased adjusted operating profits by £10m thanks to investment to grow the business over the long term; bulk ingredients hiked profits by £29m, driven by “strong execution”, good demand and “firm” margins.

“We have made a strong start to the year, with good performance across the group and higher adjusted diluted earnings per share,” CEO Javed Ahmed said.

“Bulk Ingredients had another period of excellent performance, well ahead of a strong comparative period, with improved overall earnings resulting from disciplined commercial execution and margin expansion.

“Turning to the outlook, we expect underlying adjusted profit before tax in constant currency for the full year to be modestly higher than we anticipated coming into the year driven by the strong first half performance.”

Morrisons kept its head above water ahead of this morning’s third quarter update as shares nudged up 0.2% to 224.6p.

Ingredients group Tate & Lyle leapt 3% to 665.5p as it prepared to report its interims today.

It was a quiet day for market news in grocery and fmcg yesterday but fresh pessimism about difficulties on the high street saw retail stocks take a hit.

Next slumped almost 8% to 4,544.4p after it reported third quarter results in which it warned that trading was “extremely volatile”.