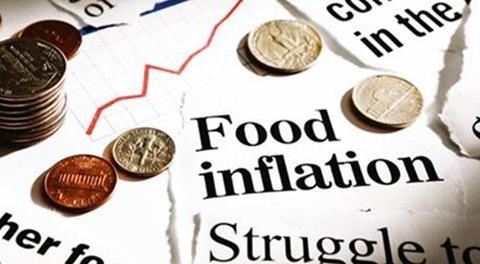 Rising food and drink prices were the biggest driver of an uptick in inflation last month, according to new figures this morning.

UK inflation nudged up to a fresh 40-year high of 9.1% in the 12 months to May, up slightly from 9% in April, the Office for National Statistics (ONS) reported.

Prices for food and non-alcoholic beverages rose by 8.7% in the year to May, compared with 6.7% a month earlier, with prices overall up by 1.5% between April and May.

The ONS highlighted bread, cereals and meat as being responsbile for the biggest cost increases and added it was the largest contribution from the food and drink sector to the rate of inflation since March 2009.

Fruit was the only category to partially offset the rises, with prices little changed having increased a year ago.

Alcoholic beverages and tobacco also rose 5% year on year, up from 4.4% in the year to April.

Carslberg CFO Heine Dalsgaard has handed in his notice at the Danish brewer to take up a role at a private equity-backed company in a different sector.

He will continue at Carlsberg until the end of the year at the latest, with the group kicking of a search for his replacement.

CEO Cees ’t Hart said Dalsgaard had been “instrumental” in driving improvements at Carlsberg since joining in 2016.

“Thanks to Heine, our ‘Funding the Journey’ culture with focus on costs and cash is today well embedded across the group,” he added. “While we of course regret Heine’s decision, we also respect his wish to pursue new opportunities outside Carlsberg. We wish him all the best in his future endeavours.”

Dalsgaard said: “Carlsberg is a fantastic company, and it has been a true privilege to be part of the team during the past six years.

“Together, we have created a much stronger Carlsberg with a clear strategy, strong results and continued significant value-enhancing opportunities. I take this opportunity to already now wish Carlsberg and all its great people the very best for the future.”

Schumacher, who has been in charge of the €11.5bn revenue Dutch dairy co-operative since 2014, will join the board on 4 October, as well as the group’s audit committee.

Before joining Royal FrieslandCampina, Schumacher spent more than a decade at Kraft Heinz Food Company, across a range of finance and operational roles, most recently leading the group’s operations in Asia Pacific.

Prior to joining Kraft Heinz, he worked at Dutch supermarket chain Ahold, having initially started his career as a graduate trainee at Unilever.

Unilever chairman Nils Andersen said: “I am delighted to welcome Hein to the board. He has a strong track record in international consumer goods and will bring a deep understanding of our industry and the environment in which we are operating. We look forward to benefitting from his insight and experience.”

A FTSE 100 rally proved short lived as London’s leading index plunged once again this morning, with inflation continuing to plague the markets. The blue-chip index opened down 1.2% to 7,065.52pts.

Shares in Ocado went backwards after the tech-focused grocer got away a £578m placing at a 9% discount to Monday’s closing price. The stock fell 2.5% to 855.6p yesterday as a result.