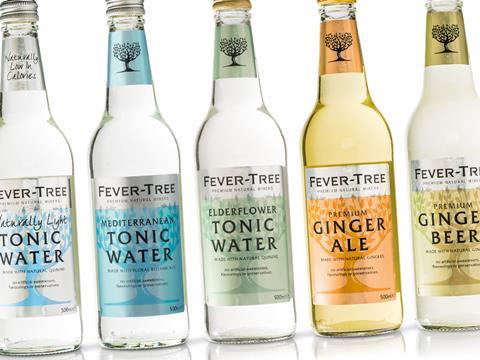 Premium mixer brand Fever-Tree (FEVR) has increased full-year sales by 71% to £59.2m on the back of a strong second half. Given the strong sales in the final two months of 2015, the group added its earnings forecasts were “comfortably ahead of its expectations”.

A 77% jump in second-half sales to 31 December came on the back of an 84% hike in the UK performance compared with the same period in 2014. The listed business said the sales performance had been strong in both the on-trade and off-trade channels, with notable growth achieved over the Christmas period against strong 2014 comparatives.

The first half momentum in the US also continued during the second half, with full-year revenue expected to be about 65% ahead of 2014.

CEO Tim Warrillow said: “We are encouraged to report another positive trading statement. Fever-Tree continues to trade strongly, buoyed by a festive period significantly ahead of last year. We have continued to widen and deepen our penetration with growth across our product range in all our regions. We remain well positioned in our markets and look forward to the future with confidence.”

Ready meal manufacturer Bakkavor has sold £163m worth of shares to a company owned by CEO and chairman Agust and Lydur Gudmundsson and hedge fund The Baupost Group. Bakk AL Holdings – the company owned by the Gudmundsson brothers – now owns approximately 89% of the outstanding shares in Bakkavor. The shares sold were owned by BG12 slhf and “certain other shareholders”, a short statement said. There would be no changes to day-to-day operations, the management board or other senior management positions, the statement added. Agust Gudmundssonsaid: “I am delighted to welcome The Baupost Group to Bakkavor. They are globally recognised as highly successful long-term investors and are supportive of the company’s continued expansion plans.”

Wholesaler and convenience symbol group Nisa Retail said this morning that it had added 374 stores to its network in the nine months to 31 December 2015, with 199 members recruited in the third quarter. Nisa is now working with over 3,000 retail sites. The announcement follows a Christmas trading update in which Nisa reported increased sales of 6.3% to £254m for the 10 weeks to 3 January. CEO Nick Read said: “Nisa’s ability to serve and develop a wide range of business types, from symbol retailers through to independent groups, and new start-up operations that need intensive support, sets us apart from our competitors. Our improved retailer recruitment is a testament to our distribution, flexible service, popular chilled product range and award-winning Heritage brand. In an increasingly competitive trading environment, it is our success in these areas that has convinced independent retailers to choose Nisa Retail, and we look forward to welcoming more retailers seeking to benefit from our leading services and scale.”

It’s looking like a fairly quiet week for scheduled financial results this week. PZ Cussons (PZC) is set to file its interims tomorrow, along with a Greencore (GNC) AGM, followed by trading update for Q1 from Britvic (BVIC) on Wednesday and the first-half figures from Diageo (DGE) on Thursday. Outside of grocery, Dixons Carphone puts out its Christmas trading update tomorrow, along with Carpetright Q3 and Card Factory Christmas update.