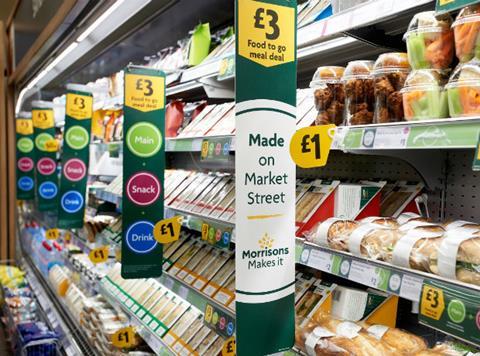 Welsh ice cream and gluten-free pies from Yorkshire are some of the locally sourced products Morrisons will add to its shelves this week as its customers ask for more British food. The Big Four supermarket has partnered with more than 200 local food makers to sell everything from cheese to Yorkshire parkin in its stores. (The Daily Mail)

The world’s largest advertiser has warned that it may cut its online budget this year, turning up the heat on YouTube and Facebook. Marc Pritchard, chief brand officer of the consumer goods giant Procter & Gamble, said he was planning to run fewer digital commercials due to concerns that they are not reaching their intended targets. (The Times £)

Shoppers tightened their purse strings again in February, with spending in the month down on the same period a year ago, making for the worst start to the year since 2012 (The Telegraph). A chorus of downbeat reports on the health of the British economy published on Monday presents a sharp contrast to the chancellor Phillip Hammond’s spring statement message that there is “light at the end of the tunnel”. (The Guardian)

Drinks supplier Conviviality has been accused of calling time on its customers well before last week’s profit warning. The closures began last summer, raising speculation that Conviviality has been struggling to meet targets for some time (The Daily Mail). Conviviality renewed its slide as investors and analysts reacted with horror to its discovery of a material error in its forecasts and despite frantic buying by both its boss and the finance director (The Times £).

Consumers could be left with a hangover if Donald Trump’s tariff plan turns into a trade war – draining the wallets of drinkers on both sides of the Atlantic. In America, the price of beer may increase if brewers pass on the 10% surcharge on imported aluminium to consumers, while bourbon could be on Europe’s retaliatory list. (Sky News)

More than three-quarters of the impact of Brexit will fall on just five sectors in the EU and the UK, according to new research, and would disproportionately affect specific regions such as London in the UK and Bavaria in Germany. Agriculture and food and drink are amongst those five, the others being financial services, automotive and chemicals and plastics, according to a study by consultancy Oliver Wyman and law firm Clifford Chance. (The Financial Times £)

It’s the kind of bad news best served with a stiff drink: the price of standard supermarket wines such as prosecco and pinot grigio could rise by up to 30% this year as the impact of 2017’s disastrous harvest is felt on the high street. (The Guardian)

The Mail on Sunday advises investors to keep Tesco in their baskets after £3.7bn tie-up with Booker. It writes: “Tesco finally reinstated a dividend at the end of last year, to the delight of many. It’s a sign that the firm feels confident enough about its cashflow to start giving some money back to shareholders.” (The Daily Mail)

The Times (£) has followed up The Grocer’s story that rising costs have dented profits at the family-owned dairy giant Yeo Valley.

Howard Schultz, the Starbucks boss, has defended the coffee shop chain’s past low tax payments in Britain, saying he has nothing to apologise for and claiming that it is “very hard to make money in the UK”. (The Telegraph)

Uber is increasing investment in food delivery this year with plans to launch its UberEats takeaway app in 100 new cities across Europe, the Middle East and Africa after generating a profit in a quarter of the locations where it operates. (The Financial Times £)

Caffè Nero has not paid a penny in UK corporation tax for a decade despite selling around £2billion of lattes and flat whites. (The Daily Mail)

The government has rejected calls for a “latte levy” to be introduced on takeaway cups to reduce the amount of waste they create. (The Guardian)

Azzurri Group, owner of the Zizzi and Ask Italian brands, is understood to be the subject of potential bid interest as private equity firms scour the bombed-out casual dining sector for opportunities. (The Times £)

A group of restaurant bosses is warning the government it must act to avoid “damaging closures and job losses” (The BBC). At least four restaurants are disappearing from the High Street every day as food chains battle to stay afloat. (The Daily Mail)