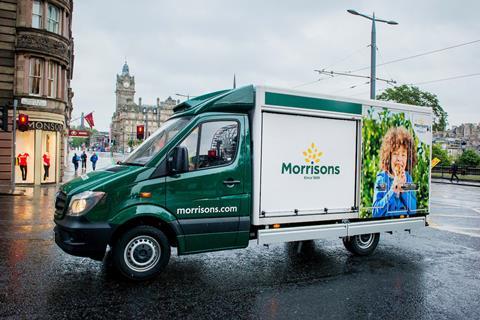 Morrisons reported rising sales during its first quarter despite ‘volatile’ trading but said costs have also increased due to the coronavirus pandemic (The Daily Mail). Online deliveries boosted Morrisons’ first quarter sales as more people ate home, but an increase in virus-related costs such as recruiting 25,000 extra workers weighed on the grocer (The Telegraph). Morrisons’ online grocery store is set to pass £1bn in annual sales by next spring after doubling the number of delivery slots during the coronavirus lockdown (The Guardian)

Food box deliveries and bumper online sales have pushed sales figures at Morrisons ahead of expectations, despite a crash in demand for its petrol (The Times £).

Morrisons said the precipitous decline in fuel sales at its supermarkets was affecting working capital and debt and that it would continue to defer any decision on special dividends until later in the year (The Financial Times £).

Sainsbury’s has handed almost £2m in bonus shares to its senior executive team less than a fortnight after deferring its final dividend. (The Times £)

Britain’s retailers have warned of the mounting risk of shop closures and job losses across the country after consumer spending plunged to record lows in April since comparable records began as the coronavirus lockdown took hold. (The Guardian)

UK consumer spending shrank by more than a third in April as shops shut to limit the spread of Covid-19. This was despite a strong performance of online sales, whose use a retail expert said could become “entrenched” (The Financial Times £). Sales of goods across the UK plummeted by almost a fifth in April as the lockdown triggered the worst slump since records began (The Daily Mail).

The government scheme which is supporting 7.5 million workers during the coronavirus pandemic will be extended until the end of October, the chancellor announced yesterday. (Sky News, The Guardian, The Telegraph, The Financial Times £).

Britain’s banks have now lent more than £8billion to keep the country’s smallest businesses afloat during the pandemic. (The Daily Mail)

The government is facing growing opposition from industry over its plans to impose a 14-day quarantine on travellers arriving from overseas, with all five key manufacturing sectors warning the measure could disrupt production, leading to supply shortages and further job losses. (The Financial Times £)

Major fast-food chains such as McDonald’s, Greggs and Subway have stepped up plans to reopen outlets as they ease back into business amid the loosening of lockdown restrictions. (The Guardian)

Land Securities has warned the economy may not recover from the coronavirus crisis until at least 2022 following the devastation caused by the lockdown (The Telegraph). One of Britain’s biggest landlords is preparing for rental payments from retailers to fall by as much as 75% in the next year as tenants default on their dues (The Times £)

A fight has broken out between Pets at Home and a short-seller who accused the retailer of “lying” to investors over loans to its veterinary businesses (The Times £). Pets at Home has come under attack from a short-seller over claims it was untruthful about a £34m loan - making the retailer’s finances seem more secure than they really are (The Telegraph).

The former boss of Asda Allan Leighton is part of a private equity firm that has bought TM Lewin, the upmarket shirt maker for an undisclosed price. (The Times £)

Uber wants to buy Grubhub, the Chicago-based food delivery company that competes with its own Uber Eats business. The deal will look tastier to investors than trust busters. (The Financial Times £)

Malnutrition is putting hundreds of millions of people around the world at increased risk from coronavirus, according to a report that follows warnings that global hunger could double because of the pandemic. (The Financial Times £)