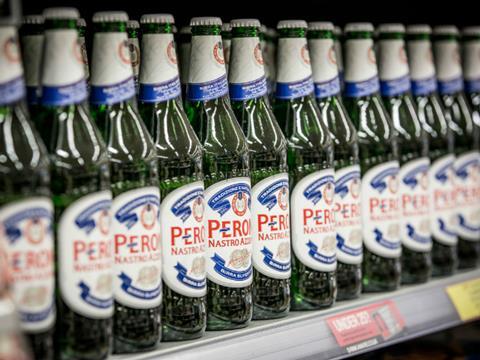 SABMiller’s first half result announcement yesterday is the major topic for the papers this morning.

SABMiller’s chief executive Alan Clark has vowed that the brewer will remain a challenger to rival Anheuser-Busch InBev until the latter’s £71bn takeover of SAB is sealed towards the end of next year (The Financial Times £). He said SAB would “keep its shoulder to the wheel” ahead of the deal, but Clark refused to comment on AB InBev’s reputation as a cost cutter or how many job losses would result from the forecast $1.4 billion of cost synergies (The Times £).

The Times (£) also quizzed Clark on his thoughts about AB InBev’s beers. His favourite AB InBev product? “An unopened beer bottle,” he quipped. Had he ever tried a Budweiser, the self-proclaimed King of Beers and one of the world’s bestselling brands? “No, I haven’t, unfortunately — or fortunately.”

Morrisons is losing the director who fought against the excessive pay of ousted chief executive Dalton Philips. Johanna Waterous, a former McKinsey veteran, won plaudits during her time as head of the supermarket’s remuneration committee for slashing the bonus pay-outs for Mr Philips during his ill-fated tenure. (The Telegraph)

The FT suggests that Dave Lewis is beginning to find life hard going at Tesco. It writes: “Dave Lewis is not a happy man. The task of reviving Tesco is proving more Sisyphean than he could have imagined when he left the comparative comfort of Unilever in July last year… With Tesco shares almost back down to their post-crisis nadir, you have to wonder whether he is starting to seek excuses for failure.” (The Financial Times £)

“Same-day delivery wars hot up in the UK, but Amazon still sets the standards”, writes The Telegraph, on the news that Amazon has launched unlimited same-day delivery service for customers in Greater London, parts of Hertfordshire and Berkshire. (The Telegraph)

Fishmeal and fish oil prices could strengthen over the next year as the El Niño weather phenomenon warms the currents around Peru, the world’s largest exporter, hitting the margins of seafood companies. (The Financial Times £)