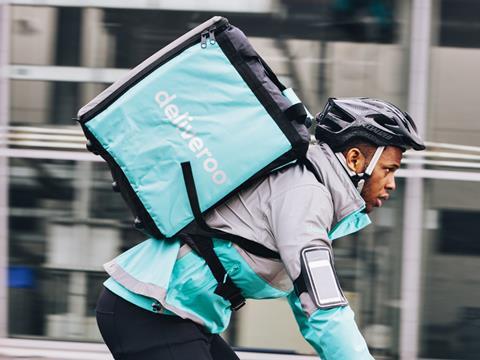 Deliveroo said its order volumes more than doubled to 71m in the first quarter of 2021, as chief executive Will Shu admitted he had “a lot of work ahead” to win over investors after the firm’s disastrous initial public offering (The Financial Times £). The boss of Deliveroo has conceded that the company will have to work hard to prove itself to the stock market after the slump in its shares that followed last month’s £7.6bn listing (The Times £).

Deliveroo saw its order numbers rise by 114% to 71m in the last three months, fresh figures show (The Daily Mail). Deliveroo has revealed that order numbers more than doubled over the last year - but warned its rapid growth will slow as lockdowns ease (Sky News).

Food delivery firm Deliveroo has apologised to riders after a software error meant some were overpaid a bonus. (The BBC)

Naked Wines says its biggest market is now the US, where social-distancing restrictions have helped normalise online alcohol shopping, boosting the subscription-based wine supplier’s sales beyond expectations (The Financial Times £). Naked Wines delivered forecast-beating full-year sales yesterday as the pandemic drove a sea-change in the willingness of American consumers to buy their wine online (The Times £). Sales at Naked Wines surged last year as drinkers bought considerably more alcohol online in response to the coronavirus pandemic and the shutting of hospitality venues (The Daily Mail).

The Hut Group is increasing the amount it plans to spend on acquisitions this year after the pandemic accelerated the shift to online shopping and provided it with more dealmaking opportunities (The Times £). Online retailer THG has said it will spend more on acquisitions this year than previously planned as the pandemic generates more opportunities (The Financial Times £).

Hut Group aims to become the new Ocado, writes The Telegraph. FTSE 250 retailer-cum-technology company pins its hopes on an e-commerce platform it sells to other retailers, but growth has disappointed. (The Telegraph)

The Hut Group drew in 11million new customers last year, as demand for beauty and ‘self care’ products rocketed during lockdown. (The Daily Mail)

The reopening of restaurants, bars and cinemas is set to boost PepsiCo after consumers stocking up on crisps and fizzy drinks drove its revenue higher in the most recent quarter (The Times £). PepsiCo’s sales rose faster than expected in the first three months of the year, driven by shoppers stocking up on snacks during the pandemic (The Financial Times £).

Marks and Spencer has launched legal action against Aldi over a claim that the discount supermarket is infringing the trademark of its Colin the Caterpillar cake (Sky News, The BBC). It is being billed as the ultimate food fight and could get nasty: Colin the Caterpillar is going to war with lookalike Cuthbert (The Guardian). M&S is taking legal action against Aldi, saying it has infringed multiple trademarks with its “Cuthbert the Caterpillar” cake, in the latest in a series of such complaints against the discounter (The Financial Times £). M&S claims it infringes its trademark and could lead shoppers to falsely believe the two products are sourced to the same standards (The Telegraph).

First-quarter sales at three of L’Oréal’s four businesses have exceeded levels from before the Covid-19 pandemic, putting the world’s biggest cosmetics maker on track for recovery this year. (The Financial Times £)

Workers at Amazon are not “treated as robots”, Jeff Bezos insisted in his final shareholder letter as chief executive (The Times £). Amazon needs to “do a better job” for its employees, Jeff Bezos told shareholders in his final letter as chief executive of the online giant, but he also pushed back against criticism of the company’s work practices (The Guardian). Amazon founder Jeff Bezos has vowed to make his company a better place for its workers (Sky News).

People across England are rushing to make the most of coronavirus restrictions easing this week, with newly published official figures showing a surge in restaurant reservations and road traffic. (The Guardian)

At least a third of French wine production worth almost €2bn (£1.7bn) in sales will be lost this year after rare freezing temperatures devastated many vines and fruit crops across France, raising concerns over the climate crisis. (The Guardian)