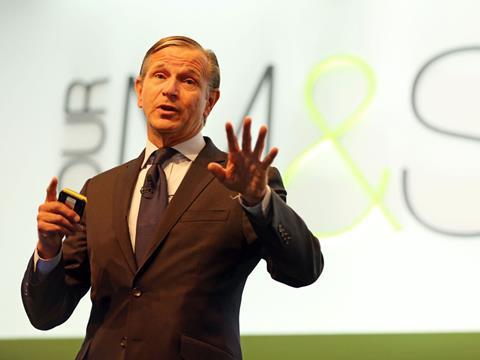 Marks & Spencer is due to report another slump in clothing sales, heaping renewed pressure on chief executive Marc Bolland.

The high street chain is expected to announce a 1.2pc fall in sales of general merchandise – the bulk of which is clothing – at its half-year results this week in the latest sign that Mr Bolland’s attempted restoration of its troubled womenswear arm is far from certain. (The Telegraph)

Additionally, Marks & Spencer’s struggling international business is hampering the company’s turnaround amid a slowdown in China and conflict in the Ukraine. The company is expected this week to say international profit fell by a third in the first half of its financial year, as it cut back on overseas expansion plans and closed stores in Eastern Europe. (The Daily Mail)

Marc Bolland is exploring potential acquisitions in an effort to revive sales at the high street retailer, according to the FT. Bolland has been eyeing niche fashion retailers, in a move that would bring external brands into M&S’s clothing arm for the first time, with The White Company, a luxury fashion and home furnishings chain, mention as a good fit. (The Financial Times £)

While the Guardian looks at an M&S data glitch writing, “Marks & Spencer has belatedly jumped on to the retail loyalty card bandwagon with its new Sparks offering… but maintaining loyalty can be difficult if your website has to shut down for two hours because people can see details of others’ accounts when they log on, as happened to M&S last Tuesday.” (The Guardian)

Morrisons has endured another quarter of falling sales, highlighting the scale of the task facing the new management heading into the crucial Christmas months. Analysts have forecast a fall of more than 2% in Morrisons’ third quarter like-for-like revenues, following a 2.7% drop in the first half of the year, in a sign that the supermarket is yet to halt the deterioration. (The Telegraph)

Meanwhile, Morrisons is to become the first supermarket chain to donate all its surplus edible food to local community groups. The retailer is acting in response to public outrage over the amount of unsold food thrown away by supermarkets. Some stores have been accused of deliberately sabotaging discarded food by pouring bleach over it to deter people from foraging in their bins. (The Times £)

High street retailers could have to stump up an extra £14bn by 2020 to meet a swathe of new tax changes and initiatives introduced by George Osborne. With the country’s retailers already grappling with significant structural challenges, the burden of paying business rates, the chancellor’s national living wage and apprenticeship levy proposals mean that their costs will soar, according to the British Retail Consortium. (The Times £)

Lidl’s boss has been given a 56% pay rise after a bumper year in which annual sales hit a record £4bn. Ronny Gottschlich, managing director of the budget grocery chain that has 620 stores, was paid £970,000 in 2015. (The Daily Mail)

In wider retail, Regulators are investigating Sports Direct over allegations that it blocked negative reviews of products on its website in an apparent attempt to boost sales. The Competition and Markets Authority is targeting Sports Direct and a handful of other retailers, as part of an investigation launched in June to examine abuse of website reviews. (The Daily Mail)

Amazon has lost market share in non-digital films, video games and music for the first time in at least four years as the high street fights back. The American online retailer continues to be the UK’s biggest seller of CDs, games and DVDs but its share slipped by 1.2 percentage points to 20.4% in the three months to 27 September, according to the latest figures from Kantar Worldpanel. (The Guardian)

“British street food savours success”, writes the FT – pointing to London Union which is aiming to sell 10 per cent of its equity for £3.5m through crowdfunding. However, it cautions “others say consumers have already had their fill”. (The Financial Times £)

The Telegraph looks at Nim’s Fruit Crisps, which it says is ramping up manufacturing in a bid to become a mainstream brand to rival Walkers. (The Telegraph)