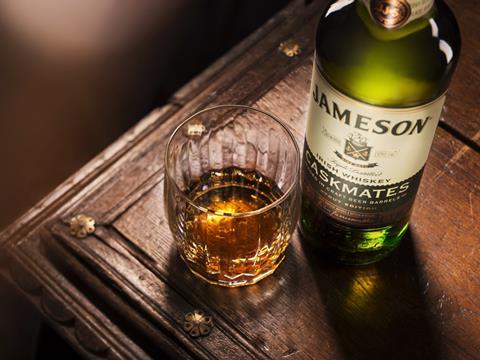 An American appetite for Irish whiskey has driven sales at drinks giant Pernod Ricard, which has reported strong growth in the United States. It was a taste for Jameson, up 16 per cent, which helped lift takings. Some 5.7m nine-litre cases of Jameson left its Irish distilleries last year. (The Daily Mail)

Investors raised a glass to French drinks giant Pernod Ricard despite the world’s second biggest distiller revealing it had suffered a sales slump in its flagship Absolut vodka and Chivas Regal whisky brands (The Telegraph, The Times £).

Lower rates of economic growth in China and the government’s continuing crackdown on so-called “conspicuous consumption” of largesse and gift-giving by officials helped hit revenues in China, offsetting strong growth in the US. (The Financial Times £)

Walmart plans to cut 7,000 back office and accounting jobs in its US stores. The move comes after a pilot programme in 500 stores this summer that tested a new accounting system. A Walmart official said the employees affected by the changes would have the option of moving into jobs serving customers if they chose to stay. (BBC)

A whistleblower rewarded for exposing accounting violations has taken the unusual step of naming his employer, Monsanto, in the hope of prodding the regulator to take action against its auditor, Deloitte. (The Financial Times £)

The South African owner of Wimpy is moving into the posh burger market after agreeing a £120 million acquisition of the Gourmet Burger Kitchen chain. (The Times £, The Telegraph)

The battle for control of Poundland took a fresh twist after a voracious New York hedge fund raised its stake in the high street chain to nearly 25%. The deal has been dogged by interventions from activist investor Elliott Advisors, which is run by Paul Singer, a self-made billionaire who has been criticised for presiding over a ‘vulture fund’. (The Daily Mail)