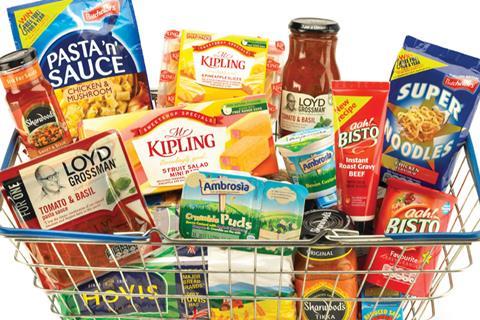 Premier Foods has reported a positive festive trading performance as demand for its sweet treats, including mince pies, boosted sales 2.6%. Mr Kipling sales grew 10% over the 13-week period to the end of December. International sales dropped 17% however, after an Australian supermarket reduced orders (The Telegraph).

In an opinion piece, The Telegraph congratulates Premier Foods new CEO Alex Whitehouse for bringing back some life into “one of the UK’s long standing zombie companies”. The business balance sheet however, still counts a debt of £470m, £100 more than its market cap. “If Whitehouse can repair the balance sheet, Premier may finally have the recipe it has been missing for so long,” argues The Telegraph.

Sainsbury’s has beaten rivals Morrisons and Asda to be named the cheapest supermarket of 2019, according to a survey by Which? The consumer group tracked the performance of 53 branded items, including Andrex toilet roll and Weetabix cereal over the year, and with a basket averaging £107.01 every week, Sainsbury’s emerged as the cheapest. The survey included only supermarkets selling their entire range online, so discounters Lidl and Aldi were not included (BBC).

UK retail sales have suffered the worst contraction since records began in 1957, official figures from the Office for National Statistics have shown. December sales volume contracted 0.6% against the prior month as food sales reported the weakest performance since 2016 (The Financial Times £).

The ONS figures sparked further calls for a reform of the “outdated” business rates system, which many retailers blame for the continuing shop closures and failing of their businesses (The Financial Times £).

Sainsbury’s chilled food distributor NFT Distribution Holdings is exploring a sale of part or all of its business after reporting multi-million pound losses (Sky News).

UK brewers are racing up to bring out “nolo”, no-or-low-alcohol, beers, spirits and cocktails to keep up with the growing trend of alcohol-free drinking among the younger generations. Brewdog opened an alcohol-free bar in London after sales of “nolo” drinks across the pub trade reached £60m last year, a 50% increase (The Guardian).

A Financial Times (£) opinion piece argues that Cranswick’s investors should thank the outbreak of African swine fever in China as the UK company proved a clear beneficiary of falling pork sales and rising prices. Due to rising exports, accounting for 9% of total sales, almost doubled this year with Cranswick expecting its full-year performance to be “even better” than the “robust” performance previously expected.

In an analysis piece, the Financial Times (£) argues that part of the UK’s biggest retailers lacklustre performance is due to their slow adoption of online sales. Big names such as John Lewis, Marks & Spencer and Debenhams reported below-par online performances during the “golden quarter” partly blamed on the failure of their online businesses to deliver sales growth.

Department store chain Beales is set to call in administrators at KPMG early this week amid ongoing efforts to find a buyer. The move, which puts 1,300 full-time jobs on the line, follows repeated attempts to secure buyers for the chain’s 22 stores after it was hit by high business rates and falling sales (Sky News, The Times £)

French retailers have blamed the continued strikes in Paris for contraction in their earnings. The shares of supermarket group Casino fell more than 10% on Friday, after it halved its forecast for earnings growth in France to 5%. Sales growth at the division was flat in the fourth quarter at €4.2bn (The Financial Times £).