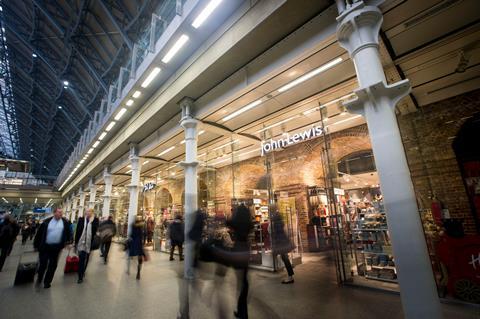 John Lewis and Waitrose will stop publishing weekly sales updates as they began to bring the two businesses together. The next update will be in September when the company will no longer break down sales and operating profits between its retail and grocery arms, making it harder to tell how the businesses are doing independently (The Telegraph).

The decision comes as the group’s department store chain has been seen struggling in recent updates, with a collapse in profitability amid challenges in the sector with rivals Debenhams and House of Fraser succumbing to rescue deals (The Guardian).

The Co-op could be close to striking deals to offload around £2bn of its pension liabilities, totalling £8bn, to insurance companies Aviva and Pension Insurance Corporation (Sky News).

Suntory Holdings has acquired a 10% stake in Glasgow-based Edrington Group, owner of The Macallan and The Famous Grouse Scotch whiskies (The Times £).

Shares at soft drinks maker AG Barr traded at their highest in 14 years – up 13% at 616p – after the group issued positive guidance stating that full-year profits would be at the “top end” of market expectations, or slightly above £37m (The Times £).

FTSE 100 delivery firm Just Eat has announced a partnership with McDonald’s to deliver the fast foods’ products. So far, McDonald’s had partnered with Uber Eats to handle its deliveries but will now become available on the Just Eat platform in the UK and Ireland (The Times £).

The food delivery company described the partnership as the second “exclusive” deal struck by McDonald’s after it partnered with Uber Eats in 2017 (The Telegraph).

Australia’s bushfires have driven the price of sheep meat to record highs. The fires in the country, the largest exporter of mutton and lamb, are expected to tighten supply after the country’s draught had already caused issues (The Financial Times £).

January brought little cheer for retailers as sales fell flat during the month according to figures from the CBI. Retailers expect the stagnation to continue into February, with 2020 looking set to be another challenging year for the retail sector (The Times £). Sales at department stores rose slightly during the month but were offset by a slump in DIY and furniture purchases (The Guardian).

Coffee chain Starbucks has temporarily shut down more than 2,000 Chinese stores after the outbreak of the Coronavirus, in a move which it said will “materially affect” its financial performance (The Financial Times £). Starbucks owns 4,300 outlets in China, its biggest market after the US. The firm told Wall Street it had expected to upgrade its guidance following a better-than-expected US performance but the virus outbreak warranted caution (BBC).

Meanwhile, McDonald’s has suspended business in five cities of the affected Hubei province, KFC and Pizza Hut have closed outlets in Wuhan and Disney has shut its Shanghai and Hong Kong resorts (Sky News).