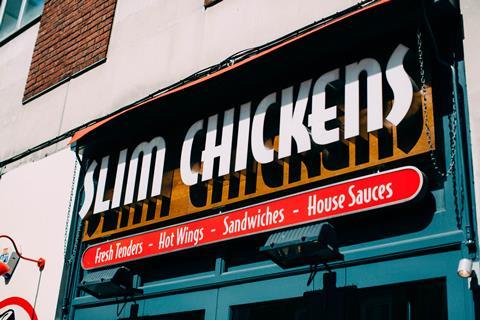 Ranjit Boparan will today open four restaurants under the Slim Chickens brand and plans to be operating 350 restaurants in Britain under the US brand in the next few years. His Boparan Restaurant Group, which also owns the Carluccio’s and Ed’s Easy Diner brands, has the master franchise for Slim Chickens for the UK, Europe and airports. (The Times £)

“Relentless” increases in the price of food may not hit their peak until next year, an industry group has warned. The Food and Drink Federation, which represents UK food and drink makers, said it usually takes 7-12 months for producers’ costs to reach shop shelves. (The BBC)

Sainsbury’s is bracing for a shareholder backlash over pay when it faces investors at its annual general meeting on Thursday. The UK’s second biggest grocer is facing calls to pay the independently set living wage for all staff and contracted workers. (The Daily Mail)

Fresh concerns over the awarding of the next National Lottery licence have come to light that cast doubt over the process and the amount of money the winner has promised to raise for good causes. (The Times £)

Labour shortages have resulted in “catastrophic” food waste and placed huge quantities of further crops at risk, British farmers have warned as they enter peak season for harvesting soft fruit and vegetables. (The Financial Times £)

Boots is facing fresh uncertainty after its US owner abandoned plans to sell the business — but left the door open to a disposal once market conditions improved (The Financial Times £). Walgreens Boots Alliance explained in blunt terms why it put Britain’s biggest high street chemist up for sale this year: the American company was considering whether it needed Boots (The Times £).

For Walgreen’s chairman Stefano Pessina, who built a drug retailing empire through more than 1,500 deals over five decades, the failed sale of Boots marks a rare blot on an impressive copybook. Was the pharmacy kingpin the victim of a sudden and unpredictable turn in market conditions? Or did Pessina get his comeuppance for slapping a fanciful price tag on a tired business? (The Times £)

Walgreens Boots Alliance’s decision not to give Boots the boot creates a problem, writes the FT. Proceeds from the sale of the UK chain would have accelerated the expansion of Walgreens Health. This division, launched last October, is the US drugstore operator’s foray into healthcare. It has been touted by chief executive Roz Brewer as a potential “new growth engine”. (The Financial Times £)

Rising food prices mean beef is off some school dinner menus, with staples such as potatoes also more expensive, caterers have told BBC News. Some caterers have switched to cheaper imported meats, and changed the fruit and vegetables on offer. (The BBC)

Production has been halted in the world’s biggest chocolate plant, run by the Swiss group Barry Callebaut in Wieze, Belgium, after salmonella contaminations were found. (The Guardian)

After Heinz pulled its baked beans and ketchup brands from Tesco last week following the supermarket’s refusal to allow it to raise prices, The Times looks at five occasions where brands and supermarket have fallen out (The Times £). The BBC says the story is an illustration of the challenges facing suppliers and supermarkets as they grapple with huge cost increases. Who should bear the pain of absorbing soaring raw material costs, energy price rises, and higher fuel bills for deliveries? (The BBC)

Campaigners are calling on the government to back a £350m high street buyout fund that would bring communities, business and councils together to revive 200 neglected properties across the country. (The Guardian)

Europeans need more than a ban on flavoured products to go tobacco-free, writes The FT. “Across 27 member states, the European Commission found that sales of HTPs rose from fewer than 1bn sticks to almost 20bn in the space of two years. Claims that they are less harmful than cigarettes lack independent research.” (The Financial Times £)

Irish whiskey roaring back after decades of decline. Distillers are closing the market gap on their hitherto dominant Scottish rivals. (The Guardian)

RBC Capital Markets says that for lower income US households (defined as on $40k or less), alcohol consumption peaked during the apocalyptic days of March 2020. Repeat purchases of beer and wine have since been trending negative. Spirits stayed stronger for longer, possibly because of their lower purchase frequency and a smaller wallet share, but that was unwound by the recent inflation surge. (The Financial Times £)

The model Kate Moss has been named the latest creative director of Diet Coke. She will work across projects including a collection, advertising campaign films and events around the brand’s 40th anniversary. (The Guardian)

Singapore craft beer uses recycled sewage to highlight water scarcity. NewBrew, a collaboration between Singapore’s national water agency and the local craft brewery Brewerkz, has already proved popular and has sold out on tap at the brewery’s restaurants, according to reports. (The Guardian)