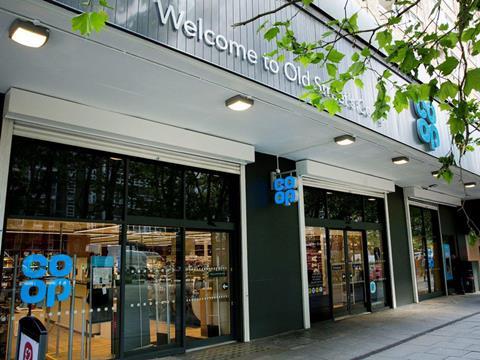 A bumper day of grocery news sees heavy coverage of the investigation into The Co-op’s treatment of suppliers, John Lewis Partnership’s trading troubles and a share price plunge at Conviviality.

The Co-operative Group could become the first British supermarket to be hit with a fine for mistreating suppliers after the grocery regulator said it had a “reasonable suspicion” that industry rules had been broken (The Times £). The ‘ethical’ Co-operative supermarket chain is facing a probe into its treatment of suppliers after it apologised for charging sky-high fees and refunded 110 firms a total of £500,000 (The Daily Mail). Regulators have launched a probe into the Co-operative Group that could force it to pay £70m of fines for mistreating its suppliers (The Telegraph). The Co-op is being investigated by the government’s supermarket regulator after refunding £500,000 to suppliers it treated unfairly (The Financial Times £). The Co-op is facing an investigation by the grocery industry watchdog into the treatment of suppliers by its supermarket chain, which could lead to a multimillion-pound fine (The Guardian). The Co-op accepted it had “fallen short” and disclosed it had already repaid £500,000 to 110 suppliers (The BBC).

Profits at the John Lewis Partnership fell by more than three-quarters in its latest financial year, with drab demand and pressure on margins at its premium supermarket Waitrose underlining the breadth of the challenges afflicting British high street retailers (The Financial Times £). The John Lewis Partnership will axe jobs after a 77% fall in profits. The group, which includes Waitrose and John Lewis department stores, became the latest big name to suffer from a brutal slowdown on the High Street (The Daily Mail). Earnings were hit by a squeeze on profit margins at Waitrose thanks to the Brexit-linked weakness of the pound - pushing up costs at the same time as the supermarket was trying to keep a lid on prices (Sky News).

Workers at the John Lewis Partnership will receive a bonus worth just 5pc of their salary this year after the retailer cut the annual payout to its lowest level in 63 years (The Telegraph). John Lewis Partnership has cut its annual staff bonus to the lowest level in 64 years after profit plunged at the group (The Guardian). Sir Charlie Mayfield, the chairman, said it had been one of the most challenging years in the group’s history as the yearly bonus for staff fell again to 5 per cent of pay, the fifth reduction in a row (The Times £). Employees will get a 5% bonus, down from 6% last year and the lowest since the 4% paid out in 1954 (The BBC).

If you were looking for a reason for the tough year at the John Lewis Partnership, you might look no further than Waitrose, writes The Times (£). The grocer had a challenging year as it took a £50 million hit from the weaker pound and absorbed higher costs rather than pass them on to customers.

Bargain Booze owner Conviviality has warned a “material error” in its forecasts means its profit will be £5.2m lower than expected, in a late trading update which wiped more than £300m off its value (The Telegraph). A warning from the owner of the Bargain Booze stores that a material error in its financial forecasts means its profit will be £5.2 million less than expected wiped more than £300 million off its stock market value (The Times £).

KFC has gone back to its original recipe for chicken deliveries by rehiring Bidvest Logistics in the wake of last month’s supply fiasco (The Guardian). KFC has switched the supply of 350 of its UK restaurants back to its original distributor, after a move to the German logistics group DHL last month prompted a chicken shortage at the fast food group’s outlets that ruffled British customers’ feathers (The Financial Times £). The chain responds to the continuing chicken delivery fiasco by going back to its old supplier in northern England and Wales (Sky News). Bidvest pledged “a seamless return” (The BBC).

Britvic was sparkling after analysts at Morgan Stanley upgraded the shares and lifted their price target, helping to propel the drinks group behind Robinsons and Tango sharply higher (The Times £). hares in Tango maker Britvic fizzed after City analysts predicted that the FTSE 250 company was well-equipped to ride out the Government’s war on Britain’s sweet tooth (The Telegraph).

Domino’s Pizza has smashed expectations with its results for 2017 posting a 29 per cent jump in total revenue over the year as it held on to its solid slice of market share (The Daily Mail). Domino’s Pizza has delivered a 2% fall in annual profits despite growing sales in a tough UK market (Sky News). The boss of Domino’s Pizza believes the company could return even more cash to investors beyond the £50m pledged this year after beating profit expectations (The Telegraph). However, a slate of non-core expenses sent profits at the UK’s Domino’s Pizza Group falling in 2017 despite a nearly 32% in revenues (The Financial Times £)

Meanwhile, Scotland’s reputation as a nation of romantics was dealt a severe blow after Domino’s Pizza Group reported that Valentine’s Day had been its busiest day north of the border last year (The Times £)

M&S boss Steve Rowe attempted to dispel fears among analysts and investors that chairman Archie Norman, the turnaround veteran who made his name at Asda, may stray beyond his non-executive brief and interfere with the chief executive’s work. (The Times £)

Restaurant chains Wagamama and TGI Fridays have each been fined an undisclosed amount for failing to pay staff the National Minimum Wage. They were among 43 employers in the hospitality sector on the government’s latest list of firms breaking the law. (The BBC)

Nestlé brews shake-up in instant coffee with Gold Blend revamp, writes the FT. The Swiss group has turned its attention to soluble as it steps up efforts to revive growth. (The Financial Times £)

Wall Street cast aside shares of Kroger like a carton of expired milk on Thursday as concerns over eroding profit margins and a weaker-than-expected outlook for the current year overshadowed a strong quarter of sales growth at the US grocer. (The Financial Times £)