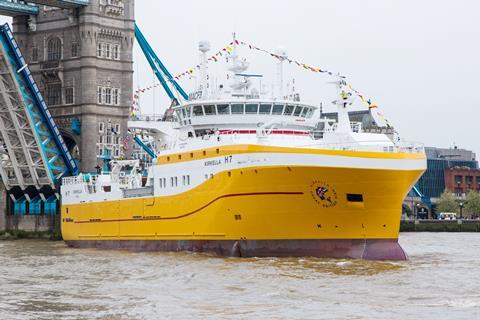 Forty years ago, hundreds of British trawlers fished in the far reaches of the North Atlantic. Now only the Kirkella does.

But as the new trawler sailed into the less icy waters of the Thames this week to be officially named by the Princess Royal, owner UK Fisheries warned Brexit meant its future was already in doubt.

Built last year, the 81 metre-long Kirkella voyages 2,000 miles from Hull for 10 weeks at a time to catch cod and haddock. It scoops up two tonnes of fish every hour and processes, freezes and packs it in under two. The average haul per trip is 780 tonnes, or 2.3 million fish suppers.

But UK Fisheries is concerned it could lose continued access to the seas it trawls, around Norway and Greenland, if the government does not change tack in negotiations.

The fishing industry mostly voted for Brexit to fix the damage inflicted on it by Ted Heath in 1970, when the UK signed up to the Common Fisheries Policy.

It was a deal so bad, says Barrie Deas, CEO of the National Federation of Fishermen’s Organisations, that the UK is only permitted to fish for 9% of cod in the Channel while the French have 84%. “European countries catch around six times as much fish in UK waters as we take out of European waters,” he says.

But the fear now is that, post-Brexit, future trade agreements between the UK and the non-EU states of Norway, Iceland, Greenland and the Faroes, over areas referred to by the EU as Northern External Waters, or NEWfish for short, could be every bit as damaging.

In the no-deal continuity agreements the UK has signed with Norway, Iceland and the Faroes, the UK has granted them access to UK waters without any mention of reciprocal access. And there has been no attempt to negotiate with Greenland. Without reciprocal access agreed, the Kirkella would no longer be able to visit its traditional fishing waters.

Sir Barney White-Spunner, chair of the UK Fisheries Advisory Board, has set out his concerns in a letter to DIT secretary Liam Fox, warning the UK might “unwittingly” be making a grave error in its negotiations.

“Our concern is that our operation, our company, our industry, is based on that access and we want to be absolutely certain that whatever happens in the Brexit negotiations, the ability to fish in Norwegian and other Greenland and Icelandic waters is preserved,” he says. “The best way to do that is to make certain we don’t give Norway access without corresponding access for us to fish in their waters.”

Such an agreement shouldn’t be difficult for the government to secure, argues UK Fisheries CEO Jane Sandell, since Norway sells £500m of fish a year to the UK. “I think they will be happy to be doing business with us.”

And White-Spunner says the response from Fox “wasn’t bad. However we need to keep the pressure on because it is so completely critical. We want clear provision that when you’re talking about the NEWfish area, any agreement will specify that for them to be able to sell fish here, the quid pro quo is us ­having quota access.

“This is where the politics of Brexit meets reality, jobs and mortgages,” he adds. Without a quid pro quo, “it is bad news. It would be the end of a great British fishing tradition.”

Crowds gathered along the Thames on Wednesday to watch the traditional ceremony in Greenwich to name the 4,000-tonne trawler will have been unaware the tradition the Kirkella represents is at risk. Will they soon?