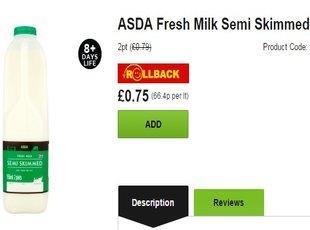 Asda has followed Sainsbury’s and Tesco in cutting the price of one and two pints of milk.

The supermarket reduced its one-pinters from 49p to 45p and two-pinters from 79p to 75p [Brand View]. Its four-pint bottles remain at 89p.

Sainsbury’s was the first of the major mults to lower its prices on one and two pints of milk at the end of June, followed by Tesco last week.

Ocado is also selling two pints of milk at 75p.

Waitrose continues to sell one and two pints for 49p and 89p; Morrisons sells at 49p and 79p.

It comes as farmgate milk prices have plummeted in the face of strong milk supply and weakened global demand for dairy commodities, particularly from emerging markets such as China.

Retailers have insisted they are not passing the price cuts on to farmers.