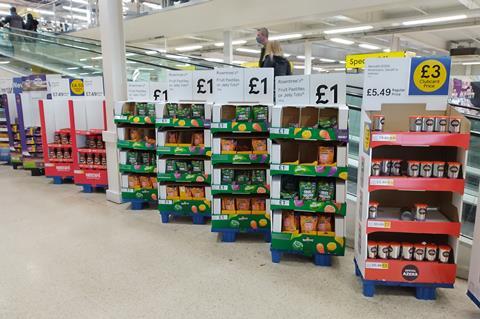 Nearly three-quarters of Brits usually always buy products that are on promotion and a quarter fear shopping will become more unaffordable if deals are banned, according to a new poll.

The results, from a survey commissioned by the FDF, come as the government consults on plans for a major clampdown on HFSS promotions as part of Boris Johnson’s plans to tackle obesity.

The survey by BritainThinks found 73% of in-store shoppers said they usually or always purchased products that were on promotion.

Nearly two-thirds of participants (62%) also agreed that promotions were an important way to save money on food and drink. Nearly three-quarters of participants (72%) wanted promotions to continue, finding them useful for saving money, stocking up on food for the future and trying new products.

A quarter (25%) of respondents suggested that if there were no promotions, they would be concerned about the affordability of their shopping.

The government launched a consultation over its plans for a ban in December, despite its own impact assessment suggesting it would cost the industry more than £1bn a year. Industry leaders claim this figure is much lower than the real cost would be.

But the FDF said the new survey also illustrated the threat to consumers’ pockets, highlighting a PHE report in 2015 that claimed a ban on promotions would add £600 a year to Brits’ average shopping costs.

“The survey results clearly demonstrate that a large majority of in-store shoppers use promotions as a way to save money on their food and drink shopping,” said FDF chief scientific officer Kate Halliwell.

“We’re extremely concerned that removing these promotions will add to the household’s food bill.

“There is evidence that during a recession, many people increasingly rely on promotions to help them save money.

“It’s predicted that the average shopping basket may increase by £600 a year without promotions in retail. We have already seen evidence of rising food costs – at the start of lockdown we saw a spike of 2.4% increase in food prices, fuelled by a 15% fall in promotions, which accounted for over half of this inflationary spike.

“We urge the government to consider these findings as they press on with their plans to restrict retail promotions and think about the impact this may have on the shopping basket and for shoppers during an incredibly difficult economic time.”