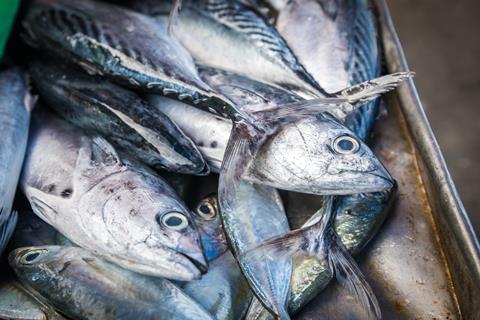 On average, raw material prices for canned tuna were down 27% year on year

Tuna prices have hit a four-year low amid plentiful supplies and subdued demand.

Thai Union reported this month that profits had surged 13.1% in the second half of 2019 thanks to a significant drop in the price of tuna, which represents “more than half of canned tuna’s production cost”.

On average, raw material prices for canned tuna were down 27% year on year at $1,217 per tonne in the second quarter of 2019, said the company, which owns John West in the UK.

According to latest figures from the FAO, skipjack tuna prices reached $1,000/tonne in Bangkok in July - the lowest level since 2015, while prices in Spanish canneries hit €1,100/tonne in the same month.

“Tuna prices have dropped to their lowest level in four years, and canned tuna demand is reportedly very weak in the major markets, particularly in Europe,” said the FAO report.

Skipjack tuna supplies increased worldwide in 2018, with improved catches in most of the fishing zones compared with 2017.

However, the FAO predicted there would be “some improvement” in tuna prices over the coming weeks. “Lower raw material prices should lead to lower retail prices and encourage supermarket promotions of canned tuna in Europe and the US,” it said.

The three-month closure on fish aggregating devices (FAD) in the Western and Central Pacific - aimed at taking pressure off juvenile stocks - also started on 1 July and fishing is “reported to have slowed to a moderate rate,” the FAO added.

Prices for skipjack tuna in Bangkok have already started rising from last month’s lows, according to analysts at Informa Agribusiness.