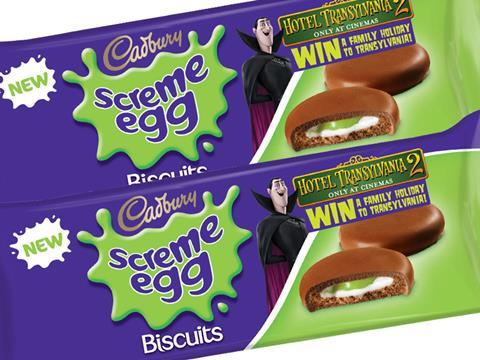 Confectionery brands have ramped up promotions ahead of Halloween and Christmas.

Six out of the top 10 brands increased featured space promotions in the major mults last month, with seasonal deals accounting for the increase in offers from Cadbury, Nestlé and Mars [Promodynamic Brands 4 w/e 17 October 2016].

“Whilst the Halloween period is relatively short lived, some brands continue to invest in rebranding their products to maximise the sales opportunities,” says Assosia director Kay Staniland.

McVitie’s Halloween range includes its Jaffa Orange Fantastic bars and Bonfire Toffee Cakes, while Cadbury has Screme Eggs and a range of biscuits, including Animals Halloweenies and Cadbury Crunchy Spiders.

Christmas lines are also already being listed in the big five, Staniland adds. “Some of the confectionery brands are maximising their spending power by dominating the featured space displays, first with a combination of Christmas and Halloween treats, which will soon switch to Christmas lines for the next two months.”

As the mults continue their drive towards everyday low prices, multibuys have fallen by 21.4 percentage points to account for just 15.6% of branded featured space promotions. Half-price deals have also been scaled back further, down 2.8 percentage points to just 4.3% of total branded offers.

As a result, average % savings have fallen again - down 1.8% year on year across branded featured space promotions.