Allegations of corruption and fraud in the industry and the Brazilian government itself have since emerged. The main thrust of the investigations seems to be the production of falsified health certificates for large amounts of meat unfit for human consumption. A whistleblower claimed a large-Mafia style operation to sell rotten meat at home and abroad was rampant in Brazil. 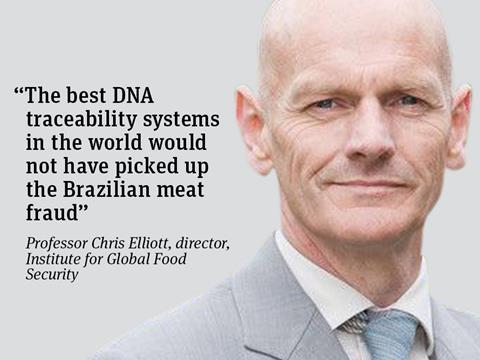 The scandal has reached the top of government and President Temer has tried to reassure the world that Brazilian beef is safe - he took 19 foreign ambassadors out for a steak dinner. Remember John Gummer feasting on a beefburger with his daughter as the BSE scandal broke?

Some doubt the Brazilian government will survive this scandal. As many countries moved to ban or restrict imports of Brazilian beef (though some restrictions are now lifted again), the pressure has mounted. One estimate has put the cost of the scandal at $4bn to $6bn just for 2017.

So what can we in the UK learn from this? Point one: don’t put that much trust in foreign government-stamped documents. The need to check the safety of our food imports (now over £40bn worth) is critical to ensure what we eat is genuine and safe.

Point two: the best DNA traceability systems in the world (which few use anyway) would not have picked up this fraud. Rotten beef has the same DNA profile as fresh beef. We need to use state-of-the-art IT-based traceability systems, along with robust testing.

Point three: food fraud is a global phenomenon and likely to escalate in severity. The last thing we should do in these Brexit times is to relax. Serious investment is needed from our government and industry to build a UK food fortress. This will, I’m afraid, bring about a small increase in cost to the food we eat, but it’s a price worth paying.

That leaves one final question: where did all that rotten Brazilian beef end up? Perhaps some day we will find out.

Chris Elliott is director of the Institute for Global Food Security at Queen’s University Belfast.