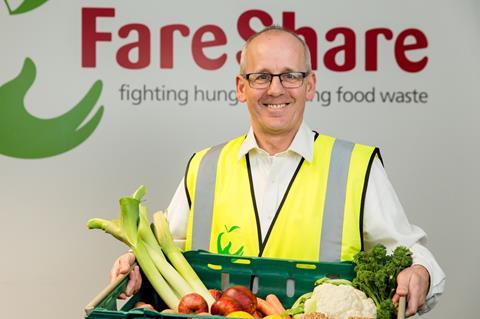 Food redistribution charity FareShare has doubled the amount of food it delivers to frontline charities since the start of the coronavirus outbreak, it revealed today.

The charity said it was now distributing almost two million meals a week as demand from vulnerable groups soared amid the crisis.

It came as the FareShare network, made up of 17 independent food redistribution organisations, announced it redistributed more than 24,000 tonnes of in-date surplus food from the food industry in the financial year April 2019 to April 2020, an increase of 26% on the previous year.

However, since the crisis began the number of charities joining the charity’s waiting list to receive food had tripled, it said.

FareShare has now signed up 500 new charities, over 80% of which are delivering food parcels to families and individuals at risk of hunger. It has also secured nine additional warehouse spaces across the UK.

To meet the increased need for packets and tins to create food parcels, the charity is also distributing large quantities of donated ambient food from supermarkets and the government, with thousands more tonnes of donated food being pledged by major food companies, as part of a partnership with IGD.

FareShare has also joined forces with British Red Cross, with the aim of using its volunteers, equipment and resources to help respond to the crisis.

The charity has also called on the government to extend a scheme to cover the cost of producers and growers saving surplus food from waste and sending it to charities, which was piloted last year after a successful campaign to win funding by The Grocer’s Waste Not Want Not campaign.

“We’re calling on the government to continue this funding as a matter of urgency,” said FareShare CEO Lindsay Boswell.

“This will enable us to unlock enough fresh food, much of it fresh fruit and veg, and double the volume of food we deliver to organisations supporting vulnerable people - not just over the course of the crisis but in the difficult months to come.”

Boswell said the food donated to FareShare over the past 12 months was “remarkable”.

But he added: “However, we know when the crisis ends, the need for our food will still be there. In April alone 856,500 more people claimed benefits, and job opportunities fell by a quarter. Many more people will fall through the gaps in society and need the support of frontline charities.

“To meet this need we will need to continue delivering much greater quantities of food. Incredibly, while people go hungry, over two million tonnes of good food is wasted every year in the supply chain.”