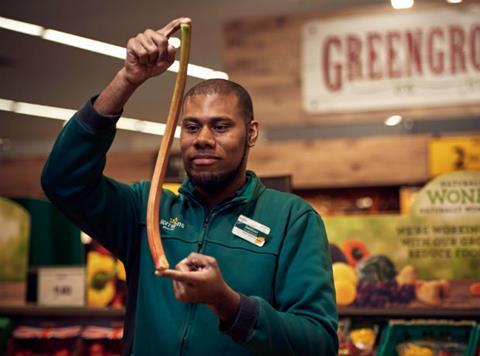 Morrisons is now selling 50 seasonal varieties of Wonky veg per year, or around 500 tonnes per week in stores and online, as part of its effort to reduce food waste

Morrisons has for the first time published figures on the amount of food wasted at its stores, in a move welcomed as a “pioneering” breakthrough by food waste experts.

The retailer has announced that just over 11,000 tonnes of food was wasted across its store network in 2017/18. It has promised to use the figure as a baseline for further efforts to reduce it, such as a continued expansion of its successful Wonky fruit & veg rollout.

The supermarket said it had worked with third party data analysis experts Valpak to develop a system to measure waste using hand-held scanners by accurately removing the weight of packaging.

It said the waste collected at the back of stores was used for recycling and reprocessing wherever possible and included food that was out of date or damaged.

Some edible food recorded as waste was being used in staff canteens or sold to staff, but Morrisons said these were not yet accurately captured at store level.

The programme has been audited by accountants PwC and approved by waste body Wrap.

The move has been seen as a major breakthrough in the battle against food waste, and The Grocer’s Waste Not Want Not campaign, which has called for supermarkets to to come clean on their figures.

Tesco became the first supermarket to begin reporting on its food waste figures in 2013, but others have been reluctant to publish, with Sainsbury’s revealing partial information about its figures in 2016 but stopping short of announcing a figure.

“We are listening to customers on food waste,” said Morrisons head of corporate services Steven Butts.

“What this does is shine a light on areas where we can focus our work and it gives us another tool to help us manage the supply chain from farm to fork.

“This will give us a baseline to work from and we’re doing this in a way that ensures that all of our work is fully joined up.”

Morrisons added that through its Unsold Food Programme it had donated more than 3.4 million items from stores since 2016.

It said it had donated enough food to FareShare from its manufacturing sites last year to make 140,000 meals.

This week Morrisons also announced it was now selling 50 seasonal varieties of Wonky veg per year, or around 500 tonnes per week in stores and online, as part of its effort to reduce food waste.

Butts said: “I think the reason why the Wonky range has been so successful is because we’ve given customers a clear choice and we’re transparent about what the product is.”

Today’s move on transparency could prove another major landmark in the industry’s combined efforts to tackle food waste.

“By measuring unsold and wasted food it’s possible to see where the opportunities to take action lie, and Morrisons is one of the pioneers in publishing this information; and a committed signatory to the Courtauld Commitment 2025. We hope this move will inspire businesses across the sector to identify the cost of food waste within their own operations, and how they can avoid good food going to waste.”

FareShare CEO Lindsay Boswell added: “We are incredibly proud of our partnership with Morrisons. Thanks to collaboration across multiple sites, FareShare is able to access range of fresh, nutritious food that is in high demand by the thousands of front line charities we support - items like fresh fish, potatoes and fruit.”