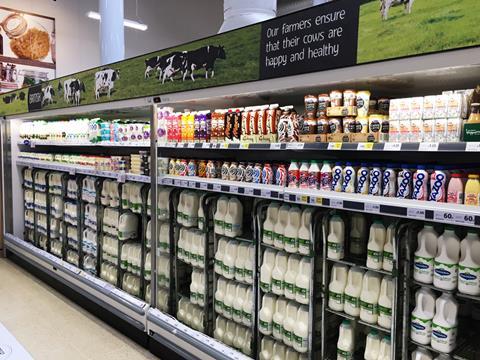 Use-by-dates on milk products could be scrapped under proposals outlined by waste charity Wrap.

The charity was in discussions with the FSA and government officials, said Andrew Parry, Wrap’s special adviser on food and drink, in a bid to reduce milk wastage.

Speaking to The Times ahead of the publication of Wrap’s latest retailer survey today (27 February), Parry said new guidance on its proposals would be issued later this year as part of an industry consultation. “We are exploring with the dairy sector whether milk could move to a best-before date. That could really help reduce milk wastage.”

A spokeswoman for Dairy UK said it had worked closely with Wrap on the creation of guidelines on datemarks and storage instructions for dairy products to prevent unnecessary food waste in 2012. It would take an “active role” in the review of current Defra guidance and Wrap’s proposals “to explore new ways to find the right balance between waste prevention and food safety”, she added.

Wrap’s retail survey, entitled Helping Consumers Reduce Food Waste, saw its researchers visit about 80 stores across England, Wales and Scotland during 2015, including all of the major supermarkets and discounters, plus smaller convenience stores.

It said about a fifth of the 500 million pints of milk wasted each year were discarded because of the use-by-label, and found that use-by-dates were increasingly being used on products that might not need them, such as milk, yoghurts, cheese and naan bread.

Some 350,000 tonnes of avoidable household food waste, worth an estimated £1bn a year, could be prevented through changes to packs and labels of key food products, the survey found.

Though retailers had acted on some of its previous recommendations to change labels to help prevent waste, many instances still existed which caused widespread confusion and sent out the wrong signals on food waste, the survey suggested.

Multiple date labels had been mostly removed from food products. However, there was still widespread conflicting guidance on freezing, and some product date labels had actually cut the time available to eat food, leading to more waste, Wrap said.

The number of products found to have two date labels fell from almost 40% in 2009 to less than 3% in 2015, while researchers found an almost complete removal of ‘display until’ dates used in combination with either a ‘use-by’ or a ‘best before’ date.

Wrap found the use of the snowflake logo to show suitability for home freezing had declined and said there was an urgent need to reinforce its value.

While Wrap said there had been “good progress” made on cutting down unnecessary levels of ‘once open use by’ guidance, it said there were other examples, particularly for chilled chicken, cooking sauces and milk where the amount of time being recommended for keeping food had reduced.

The report shows many products such as chilled cooking sauces, cheese and yoghurts also cite temperature ranges outside current guidelines.

Wrap has found that as few as a third of UK fridges are set within the recommended temperature range (below 5oC), and another third operate above 9oC. Guiding the use of fridges at correct temperature of 5oC or lower and storing the right foods in the fridge, which labelling can support, could add on average three days life to food and save households £280m a year, it said.

Retailers and suppliers were praised for increasing the availability of smaller pack options in a number of categories such as bagged salads, pre-packed apples, carrots, potatoes, mayonnaise and cheese.

However, the charity said the frequency of smaller pack sizes in some food categories had dropped, particularly for pre-packed bread and world breads. Smaller loaves remained significantly more expensive on a per kilo basis than larger loaves.

The survey findings were described as a “mixed bag” by Wrap director Steve Creed.

“We know that changes to packs and labels, which give clarity around date and storage options, can have a dramatic effect on how much good food ends up in the bin so getting the right messages in place is critical. Around 150,000 tonnes of household food waste was avoided in 2015 compared to 2007, as a result of technical changes to products, saving families around £400m a year,” he said.

“There are areas where good work continues to make a real difference and others where there is room for improvement. These insights provide a crucial snapshot of what industry is doing, and where more work is needed. They will help us drive forward change under Courtauld Commitment 2025, and will play a big part in re-energising the stall in household food waste reduction, that we recently identified. In fact, we are in discussions with the sector about trialling practical solutions that focus on making advice on storing and using our food as clear as possible.”

FSA chairman Heather Hancock said: “The findings from this survey are very encouraging, but I think that there is still more that can be done, which is why the FSA is working closely with Wrap on updating the guidance on the application of on-pack dates and related storage advice. I believe it is important that information available on pack not only helps to ensure people have safe food, but that it makes it as easy as possible for them to manage and store their food to ensure less is wasted.”