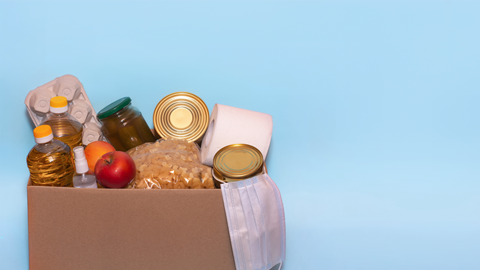 What’s happened to food waste in a Covid-19 world?

This feature is part of The Grocer’s Green Issue, read the digital edition here.

The pandemic has brought the issue of food waste to a head. So how has the industry adapted, and what is it doing as the government threatens mandatory reporting?

It had all the makings of an unparalleled food waste disaster. When the coronavirus pandemic struck the UK in March, food supply chains faced immediate and severe upheaval.

As lockdown forced the hospitality sector to effectively shut down overnight, food companies and redistribution charities were left with just days to try to find a home for tens of thousands of tonnes of food.

At the same time, the UK faced a workforce crisis that threatened to see vast amounts of crops ploughed straight back into the ground.

So, six months on, has Covid-19 proved to be the catastrophe for food waste that many feared? Or could it be the catalyst for a new era of transparency?

Last week saw the publication of two major reports on food waste: one from the World Resources Institute (WRI) and another from Wrap and IGD. Crucially, both claim retailers and suppliers have been making huge progress despite the grim backdrop of the virus.

The most glowing was the WRI report, which hailed the UK as an “international exemplar” in fighting food waste. While it slammed global efforts as being “woefully” behind in the UN target (Sustainable Development Goal 12.3) of halving food waste by 2030, the UK is actually ahead of that goal.

The Wrap and IGD publication is similarly positive. Two years on from the launch of their landmark Food Waste Roadmap, the number of food businesses committed in the UK has grown from 70 to 213, with 60 businesses signing up in the past year alone.

“Bearing in mind the year we’ve had, the fact we’ve got 213 businesses with a combined turnover of £250bn – that’s 60% of UK food industry turnover – is an impressive increase in anyone’s book,” says Wrap food waste advisor Andrew Parry.

“One of the key messages in this report is the level of engagement is hugely impressive considering we are talking about: companies who are worried about Brexit trade deals and the impact of Covid.”

A read through the list of signatories is encouraging. Despite the travails of the hospitality sector, Wrap’s latest report shows big out-of-home names like Burger King, McDonald’s UK and Pret a Manger have all joined the roadmap in the past year.

Perhaps even more importantly, the Progress Report details the rate of food waste reduction. The 45 businesses publicly reporting historically comparable data have slashed food waste by a collective 17%, saving around £300m or 180,000 tonnes.

However, that only 45 businesses provided comparable reporting data – a further 15 gave data for this year only – brings us to a key criticism from campaigners: that the industry is dragging its feet when it comes to transparency. It seems a reasonable point given that no fewer than 138 companies refused to share data publicly, instead sharing it “in confidence” with Wrap.

Transparency is admittedly going in the right direction. Wrap points out that only a handful of businesses reported publicly prior to the launch of the roadmap. That grew to 30 companies in 2018, 45 in 2019, and 60 this year. Still, of those 60 companies, the vast majority were part of a separate initiative launched by outgoing Champions 12.3 chair and Tesco CEO Dave Lewis in 2017. Most worryingly, Wrap estimates around 400 large food companies have not signed up to the roadmap at all.

Wrap admits it is unsure of the extent to which Covid has impacted on the lack of transparent reporting. Of those companies that provided evidence of implementing its so-called ‘Target, Measure, Act’ approach to tackling waste in 2019, seven said they had been unable to do so this year because of Covid-19 disruption.

The food waste battle in numbers

businesses signed up to the roadmap, representing a combined  turnover of £250bn

annual reduction in UK to farm to fork food waste if SDG 12.3 is achieved

Regardless of the reason, this lack of transparency is something food waste leaders are keen to address. Take Tesco, which last week revealed its own-label suppliers had cut 125,000 tonnes of food waste. Meanwhile, its partnership with 11 of the world’s biggest household brands – including Coca-Cola, Kellogg’s, Nestlé and Unilever – saw them cut a further 30,000 tonnes from their operations.

The supermarket is now calling on ministers to embed transparent food waste reporting into its post-Covid food strategy. Unless action is taken, events like the pandemic could “fatally undermine efforts”, it warns.

“One third of the world’s food is going to waste, while one in nine people go hungry”

To hammer home the point, Lewis bowed out from his role at Champions 12.3 boss last month with a poignant final remark: “One third of the world’s food is going to waste, while one in nine people go hungry.”

He believes reporting will help address the issue – but understands the challenges involved. In an exclusive interview with The Grocer last week, Lewis said he believed the industry was “following through” with its promises, while admitting that Tesco itself had learned the hard way about the downsides of being totally transparent.

“For the first three years of us publishing food waste data we got a massive amount of negative coverage,” he says. “So it’s very difficult to think about waste in that way.

“Companies worry that by publishing, the commentators will be critical and that they won’t understand the challenges,” Lewis adds. “And publishing is an exposure they’re uncomfortable with as they’ve seen people like me have to defend it. But the industry needs to be more ambitious.”

Plus, the industry may not have a choice in the matter for long. The government has been promising a consultation on mandatory reporting of food waste since 2018, when it appointed philanthropist Ben Elliot as its new food surplus and waste champion.

Those plans had been temporarily shelved because of the Covid crisis. However, The Grocer has learned talks were held last week between Defra, food companies and trade bodies, which made clear plans for mandatory food waste reporting are soon to get back underway. A consultation is due to come out before the end of the year.

This mandatory approach has the backing of Carina Millstone, executive director of campaign group Feedback. She says Wrap’s claims of major progress are exaggerated and believes the government needs to clamp down quickly on the lack of upfront reporting.

“Promises and pledges neither constitute action nor progress,” she says. “While we applaud the leadership of Dave Lewis, we must also recognise that Tesco has been the exception rather than the rule when it comes to tackling food waste.

“Fifteen years after the UK’s first voluntary agreement on food waste, many companies have failed to make any meaningful progress on food waste prevention, if at all,” Millstone argues. “It’s now crystal clear that the time for volunteerism is long gone and that only regulation will compel the industry laggards to catch up with the food waste leaders.”

Unsurprisingly, Wrap largely refutes these suggestions. Parry strongly denies that the roadmap lacks ambition and smarts at suggestions that the battle for food waste has been mainly a Tesco-driven agenda.

“Promises and pledges neither constitute action nor progress”

He points to the launch of the roadmap’s first ‘Whole Chain Food Waste Reduction’ project, launched this year by Sainsbury’s and its suppliers: Fullers Foods International and Lamb Weston/Meijer. For him, this was a “ground-breaking” move to measure waste in the retailer’s potato and frozen chips supply chain.

Judith Batchelor, director of Sainsbury’s brand, says this is just one example of the “very ambitious targets” across its supply chain. “We are looking to extend our work with our suppliers,” she says. “Particularly further upstream with farmers and suppliers, where much of the carbon footprint of food waste exists.”

Batchelor says the threat of Covid has actually brought retailers closer to suppliers when it comes to tackling the issue of food waste. “The pandemic has impacted everyone in the supply chain from our suppliers to the communities we serve so it’s important that we continue to support each other now more than ever,” she says. “The only way forward is through collaboration. No one business can do it on its own.”

Another collaboration highlighted in Wrap’s progress report is the Meat in a Net Zero World initiative, which saw 38 of the UK’s largest organisations involved in the production and sale of meat pledge to halve the amount that goes to waste each year. That pledge came in June, when the pandemic was in full flow.

With these initiatives in mind, Alan Hayes, head of sustainability programmes at the IGD, dismisses the suggestion of too many targets and not enough results.

“There are some businesses that may be recording their waste on the back of a fag packet and others that have embedded super-sophisticated reporting systems, but it doesn’t really matter to me,” he says. “What’s important is that they are measuring and acting to tackle waste. I would describe reporting as the icing on the cake. Companies are achieving 20%-30% reductions in their food waste: that is surely the big thing.”

Wrap and IGD’s report shows those reductions have stood firm despite Covid, along with the movement towards sharing food waste figures. In fact, the pandemic may have focused minds. “What we don’t know, of course, is how many businesses might have signed up if the situation had been different,” says Parry. “But what we do know is that nobody has been putting the phone down on us.”

That, as those who bitterly remember the reluctance of many to get involved in transparent reporting of food waste will remember, is progress in itself.

The impact of lockdown on food waste

It’s an uncomfortable truth. The more lockdown measures are eased, the more food waste there is in UK households.

In May, Wrap revealed how lockdown had taught the nation to reduce waste. Its research among almost 5,000 UK adults showed that levels of waste across staples including potatoes, bread, chicken and milk were down by a third compared with pre-coronavirus levels.

With shoppers slashing the number of trips to stores but buying substantially more products, Wrap said there had been fears of a food waste disaster.

However, as people cooked far more than usual at home and ate significantly fewer takeaways, the survey showed that households had learned to get better at preventing waste.

But that changed as restrictions were lifted. Research by Wrap shows household food waste increased by 30% in the summer, compared with the early stages of lockdown in March.

While concerns about going to the shops and running out of food initially motivated people to waste less, those concerns eased as restrictions did.

Wrap is hoping to tackle that. In August, it launched a new phase of its Love Food Hate Waste campaign called ‘Keep Crushing It’, to encourage the public to keep up their pre-shop planning, smart storage and creative cooking.