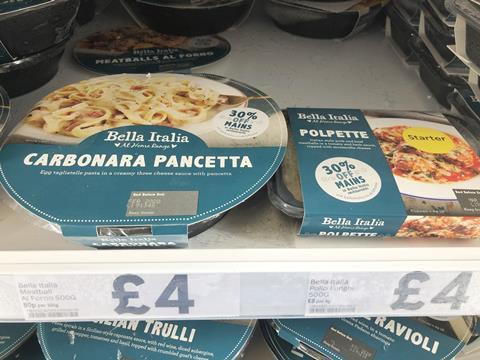 Tesco has ditched the entire range of Bella Italia frozen ready meals after just one year.

The retailer partnered with the popular Italian chain last year for a 10-strong lineup based on its à la carte menu, but The Grocer can reveal they have now completely disappeared from its stores.

A Tesco spokesman told The Grocer: “We regularly review the lines we stock to ensure they fit with customer demand.”

The Grocer has approached Bella Italia for further comment.

It comes as restaurant chains are increasingly setting their sights on the supermarkets.

October saw healthy fast food chain Leon make its retail debut in Sainsbury’s with a 14-strong range, for instance, while Yo launched a trial concession in Tesco in September, which its CEO Richard Hodgson has predicted could eventually feature in 700 stores.