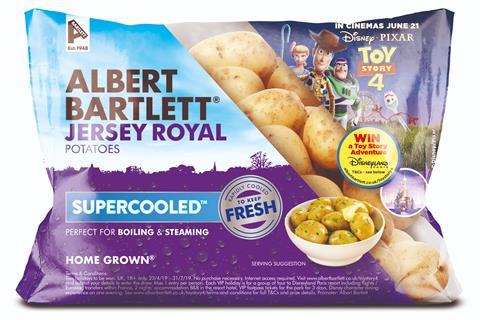 The Toy Story 4 promotion is due to run until July

The partnership will see Toy Story 4 branding carried on packs of its Jersey Royal potatoes in Lidl stores across the UK and in Scottish Asda stores from now until mid-June.

Albert Bartlett Cornish potatoes sold by Asda across the UK will also run the promotion from mid-June to late July, in addition to two million packs of Rooster potatoes sold across the mults between early May and mid-June.

Shoppers will have the opportunity to win a “money can’t buy” Toy Story adventure, with trips to Disneyland Paris up for grabs. The promotion will be supported by a significant online media campaign, including Toy Story VOD content.

Just 15% of Jersey Royal potatoes are currently sold to consumers under the age of 45, said Albert Bartlett sales and marketing director John Heginbottom [Kantar 52 w/e 24 March], who added the spud variety was traditionally seen as a product more popular “at the older end of the spectrum”.

Total sales of fresh potatoes totalled 1.32m tonnes during the same time period, a similar level to the previous year. Meanwhile, the total percentage of potatoes sold to households with children rose slightly, from 26% to 27%.

Heginbottom hoped the tie-up would “increase the appeal of the Jersey Royal new potato” – which was a “famous brand in its own right” that also benefitted from PDO status – to a younger consumer.

Albert Bartlett was also in discussions with Disney around a “wider partnership”, he added, with the aim of creating more initiatives to help parents encourage their children to make ‘better for you’ choices.

It has previously worked with the Hollywood giant on Toy Story 3 and on the launch of the movie Brave. “Both campaigns were successful and increased our brand presence in younger households,” Heginbottom said. 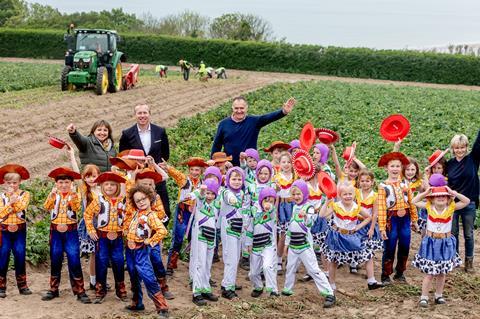 The Jersey and Cornish packs also feature new ‘Supercooled’ labelling to explain the benefits of hydro-cooling to consumers. The potatoes are showered with cold water immediately after harvesting in order to remove field heat rapidly, which helps the potatoes to stay fresh.

The brand marked the launch of the partnership with a funday for local schoolchildren in Jersey on Wednesday, where they were taken to an Albert Bartlett potato field, dressed up as Toy Story characters and learnt about the value of eating potatoes as part of a balanced diet.

“The huge reach of this promotional campaign across UK retailers will really help in getting Toy Story 4 front of mind with family audiences ahead of the June 21 release,” said Disney EMEA commercial director Alan Russell.

“We’re excited to be working with Albert Bartlett both on this initiative and on future collaborations we have planned.”