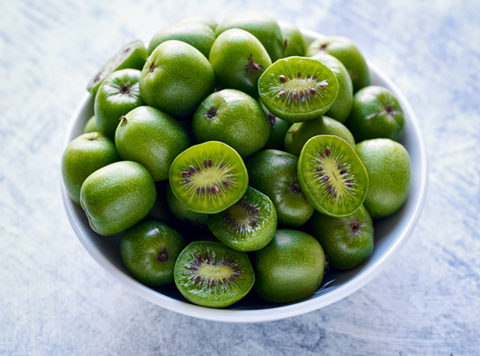 The British kiwi berry season is now underway, with this year’s crop expected to double last year’s, according to grower BerryWorld.

More than 20 tonnes are expected this year from BerryWorld’s Withers Farm in Herefordshire, compared with last year’s 11 tonnes, thanks to a greater planting area.

The miniature kiwis, originally native to northern China, have been grown in Herefordshire for the past five years. They are similar to kiwis in colour, but unlike kiwis, they are bite-sized and require no peeling.

The BerryWorld kiwi berries are available until the end of September in Ocado as well as selected Tesco, Waitrose and M&S stores across the UK. At this time of year, supermarkets source their kiwi berries from the UK, but in the imports season from Chile, according to BerryWorld.

It comes as BerryWorld has expanded its global reach by partnering with Australian producer Piñata Farms to establish a new joint venture to produce Australian-grown berries.

The joint venture company, called BerryWorld Australia, will produce strawberries, raspberries and blackberries grown on Piñata Farms in Australia and New Zealand, and will sell them under the BerryWorld label.

The first strawberries from the venture arrived in store in August, with raspberries to follow in February 2018, and blackberries expected in 2020. The fruit will initially launch in small volumes, but is expected to be produced all year round by 2019.

It is the latest step by BerryWorld to expand globally, following moves to South Africa and Iberia.

“As part of our strategy to ‘Grow the BerryWorld’, the last three years has seen the launch of BerryWorld Group, with new businesses being set up in South Africa in 2015, Iberia in 2016 and Australia in 2017,” said a BerryWorld spokeswoman.

“There are several ventures on the horizon for 2018 that we are excited to be announcing in the early part of the year.”