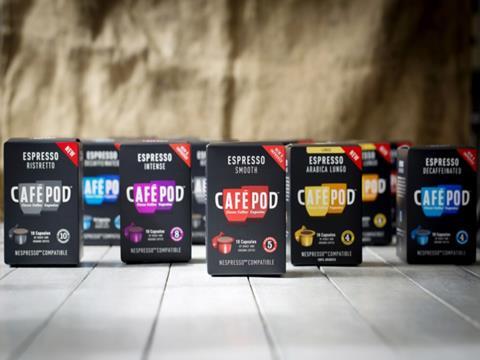 UK coffee pod firm CaféPod has completed a fundraising round of £1.35m and announced former Diageo European president Andrew Morgan will join its board after making a major investment.

Morgan has become “a major investor” into the London-based coffee pod start-up after participating in the group’s second funding round which raised £1.35m.

CaféPod manufactures pods for the Nespresso capsule system and is stocked in Waitrose, Tesco, Ocado, Booths, Selfridges and Whole Foods.

Morgan, who has served as a director for a number of other start-up ventures, said: “I get a real kick out of working with dynamic new start-ups that have something new and unique to bring to the market.

“CaféPod is an exciting new business with an impressive track record that is committed to making quality coffee readily available to consumers worldwide. The business has had huge success here in the UK but I’m particularly excited to be joining at the cusp of their breakthrough into new, global markets, which I’m confident will only accelerate their already strong growth.”

Morgan spent 27 years at spirits group Diageo and retired from the role of president of new businesses in September 2014.

CaféPod revealed that July was its strongest sales month to date, with sales 130% higher than the same period last year. It said the growth was driven by increased consumer demand for the company’s pods and greater distribution and shelf space at major retailers including Tesco and Waitrose.

The business is on track to reach a retail sales value in excess of £5m in 2015.

CaféPod Co-Founders Brent Hadfield and Peter Grainer said: “Andrew’s 35 years in international consumer packaged goods, his role in helping to grow Diageo into the global business it is today, and his passion for start-ups like ours, will really bolster our ability to tap into the billion dollar global coffee pod market.

“We’re incredibly proud of the growth we’ve achieved over the past three years of trading, but we’ve only skimmed the surface, so we’re hugely excited about untapping the vast opportunities that exist in overseas markets.”

CaféPod is also backed by investors including Steve Kurland, the European CEO of Dermalogica and Peter Roberts, CEO and founder of Pure Gym, and James Averdieck, founder of Gü.

Sales of coffee capsules in the UK are now at over £100m and are expected to grow in value to £885m over the next ten years.