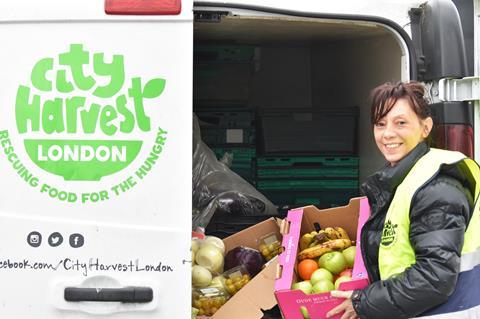 Food surplus charity City Harvest has turned to the crowd for “essential funding” as it ramps up operations amid the Covid-19 crisis, following a surge in donations.

The Acton-based organisation redistributes food to about 300 charities across London, which in turn feed some of the capital’s most vulnerable people. Since mid-March, City Harvest had received around 20 tonnes of surplus food per day – about four times its usual daily donation, it said.

As a result, the charity has kicked off a GoFundMe push to raise £50,000 to cover the extra expenses of its significantly increased activity.

Food from the charity’s regular main suppliers Innocent, Booker and Fruitful Office had “been eclipsed by the sheer number of restaurants, caterers and companies donating” after London went into lockdown last month, it said.

Nandos, steak restaurant Hawksmoor and London butcher C Lidgate “were just a few of the companies desperate to ensure their food was not going to waste” City Harvest added.

“Facebook sent over two vanloads of food from all their on-site restaurants, Barings Investments sent 100kg of fruit & vegetables, and Hammersmith library sent half a tonne of fruit & veg.”

As a result, City Harvest – which has a 15-strong core team – has been calling for more volunteers for its warehouse, having had to up the average weekly number from five people to 140. It was currently delivering more than 140 tonnes of food a week, it estimated.