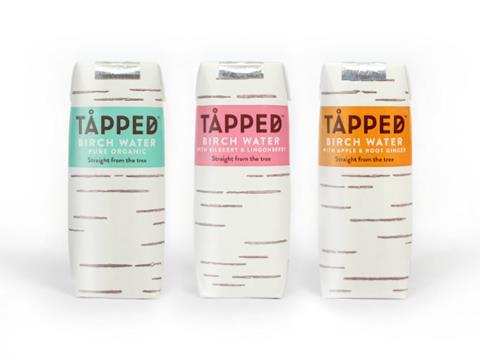 Birch water brand Tapped is raising £200,000 in a crowdfunding campaign to invest in marketing and grow its product range.

It comes as investor interest in alternatives to artificially sweetened soft drinks continues to rise.

Founded in 2015 by former Innocent Drinks employees Paul Lederer and Charlie Hoare, Tapped has won several high-profile listings with national retailers this year, including Sainsbury’s, Boots, Ocado and Holland and Barrett, as well as an upcoming rollout in Waitrose in July.

The three-strong range of birch waters is also available in Whole Foods, Planet Organic, Ocado, As Nature Intended and Amazon, as well as in yoga studios, gyms, coffee shops and delis.

The company plans to use the money for sales and marketing activities, as well as expanding the range with new flavours and pack sizes.

“Having expanded our distribution base for Tapped this year, now is the time for us to invest further in marketing so we can raise awareness, trial and consumption of birch water,” Lederer added.

Hoare, who spent more than two years as a commercial executive at Innocent, said: “We have several new flavours ready for our 250ml format and have had enquiries about a larger pack from half a dozen retailers.”

Birch water brands are hoping to replicate the success of coconut water, which has exploded from a niche to a household category in the past few years.

Tapped said that tree waters are forecast to grow into a $1bn-plus global market over the next decade as consumer continue to shun sugary and artificially sweetened soft drinks as the war on sugar intensifies.