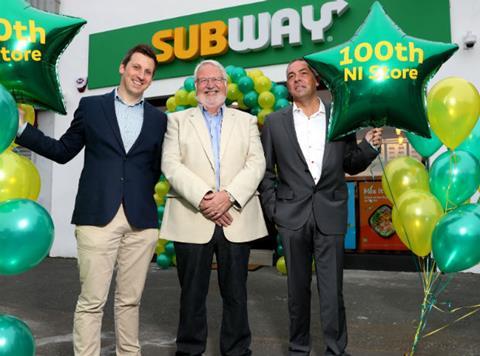 Subway has opened its 100th store in Northern Ireland.

It is the third Subway store for Aamir and Akhtar, who first became franchisees in October 2007 and count units on Woodstock Road, Belfast and in Kings Square Shopping Centre among their portfolio.

“We saw a lot of potential in this location, plus I live nearby and there is a great community feel here,” said Aamir. “Akhlaq and I looked at many different franchise possibilities and spoke to franchisees and a Subway franchise made sound business sense to us. We are also passionate about the product and love the fact that there are low-fat options available.”

Subway opened its first store in Northern Ireland 19 years ago and has created more than 1,500 jobs during that time.

Akhtar added: “It is great to see the Subway brand expanding like this in Northern Ireland and to be a part of that momentum. We are so excited to open our third Subway store and knowing it’s the 100th store in Northern Ireland is just the icing on the cake.”